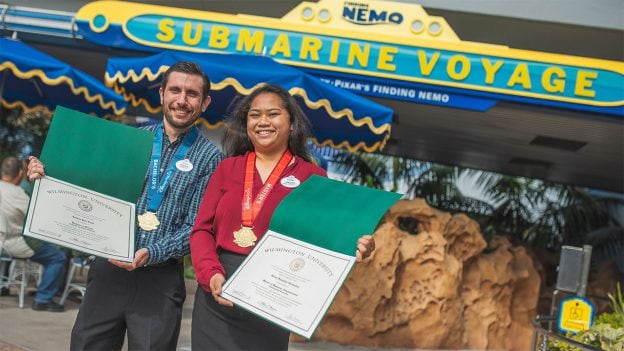 From Tomorrowland to Wilmington: Disney Aspire Grads Collect Diplomas Together

When longtime friends and fellow Disneyland Resort cast members Haley Hernandez and Joshua Cook traveled from Anaheim to Delaware last month to walk at their commencement, it marked the finish line of a journey that began in 2018 when they both enrolled in the Disney Aspire program.

“I was not planning to go to grad school, but when I heard about this opportunity, I could not pass it up,” said Haley, who earned her MBA in Organizational Leadership from Wilmington University in 2020. “I talked to my family when I was initially doubting it, and they encouraged me to use the benefit that Disney was providing.” Currently a core working lead and trainer in Tomorrowland Attractions at Disneyland park, Haley hopes to one day teach university business courses.

Josh, who worked in Tomorrowland with Haley, had put his higher education on hold until learning about Disney Aspire. He also earned his bachelor’s degree last year from Wilmington University in Computer and Network Security, and now works in his dream field of data integration and analytics at the resort.

“Everything was handled seamlessly by Disney,” Josh said of Disney Aspire, which pays full tuition up front and reimburses fees for eligible hourly cast and employees pursuing a wide variety of programs at more than 10 in-network schools. “I didn’t have to think about sending emails to different people or getting kicked out for forgetting steps. They definitely took a lot of stress out of it because I didn’t have to worry about that stuff.”

To Haley and Josh, Disney Aspire represents a chance for advancement and opportunities to better position themselves for future dreams and goals. “The primary reason I did it is because I wanted to be able to further grow and develop within the company, and I knew that higher education would open more doors,” Josh said. “Disney is providing something that you probably wouldn’t have another chance at, so I would say take it.”

“After my undergrad, I was super burned out, but I began thinking about how I could continue to make myself better — not just for myself but for my team,” said Haley. “It just meant a lot in the form of, ‘Your company cares about you to give you the opportunity.’”