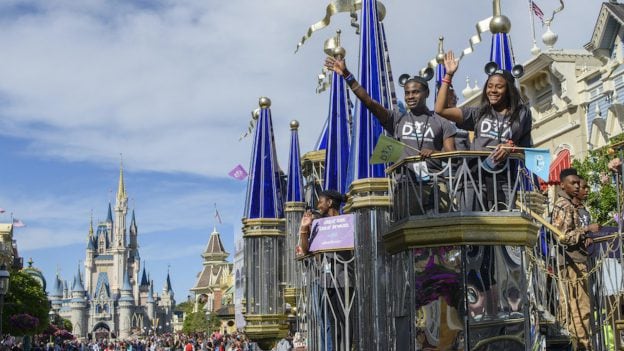 I was there that day. It was more than a decade ago, 15 years to be more precise, when we here at Walt Disney World Resort first opened our arms and welcomed a group of talented young teens from across the country for an innovative new mentoring program we called Disney Dreamers Academy.

I remember seeing the wide-eyed look on their faces as they arrived, eager but unsure of the immersive mentoring experience that, in a sense, was about to change their lives. Just think, many of those same faces in that first program, and ones in the subsequent groups that followed each year, today are doctors, engineers, performing artists, humanitarians and more. Lucky enough for us, a couple of them have even become Disney cast members.

That, of course, has been the goal of the program all along – nurture, foster and develop the career aspirations of hundreds and hundreds of teens around the country, particularly Black students and those in underrepresented communities, by helping them do the one thing we do here at Walt Disney World Resort every day: Dream.

They are immersed in vibrant career workshops, networking sessions and mentorship events led by business executives, community leaders and celebrities who take the career aspirations of these students and supercharge them in ways they probably never imagined.

This year, from March 3-6, Walt Disney World Resort will see a new group of students who will participate in the program after being selected from thousands of applicants who answered essay questions about their personal stories and dreams for the future. They will be greeted by our most innovative curriculum yet, one that involves new immersions, new educational workshops and more.

Another part of the program’s evolution this year will be the awarding of college scholarships to 11 students from underrepresented communities attending Historically Black Colleges and Universities through a collaboration with ESPN’s The Undefeated and GRAMMY-nominated rap artist Cordae.

This landmark 15th year of Disney Dreamers Academy is less than two months away and we are passionately putting the final touches on this year’s program. But this we know for sure – this 2022 class of Disney Dreamers Academy will build on the program’s rich legacy, one that stands as an unmistakable example of the power of imagination and inspiration, even among those you might least expect it.

All you have to do is Dream!