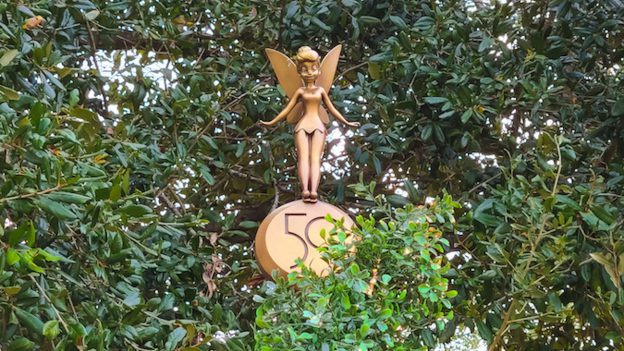 Everyone’s favorite sparkling sprite, Tinker Bell, made her official big screen Disney debut when Walt Disney’s feature production of “Peter Pan” was released on Feb. 5, 1953. The film marked the rare occasion when all the names of Disney animation’s celebrated “Nine Old Men” appeared together in the opening credits (along with Norm Ferguson). These directing animators and Disney Legends brought the story’s carefully crafted personalities to visual life.

In earlier stage and live-action photoplay adaptations of James M. Barrie’s “Peter Pan,” Tinker Bell had been primarily visualized as a lighting effect. For years, Disney artists like David Hall and Mary Blair explored possible designs for the pivotal pixie character, but it was under the pencil of one of “the Nine,” Marc Davis, that the final look – and life-force – of Tinker Bell arrived at last. Playful, petulant, mercurial and mischievous, this tiniest member of the cast not only drove the movie’s plot, but became at once the embodiment of Disney magic.

Less than two years after her cinematic arrival, Tinker Bell further cemented her role as the herald of enchantment when she became the official “hostess” of the weekly Disney anthology television program. This time, in the care of Marc Davis’ colleague Les Clark, Tinker Bell radiated a slightly streamlined mid-century modern aura along with her pixie dust glow. She also acquired a magic wand – all the better to beckon the fireworks that would become a staple of the series’ opening titles for decades to follow.

Many other artists have depicted Tinker Bell in new ways for various appearances. Disney Legends Eyvind Earle and John Hench painted sumptuous storybook illustrations, and comic artist Al Hubbard’s expressive brush-inked Tink enjoyed many unusual adventures, sometimes with other diminutive Disney friends like Jiminy Cricket and Dumbo. In recent years Disney storytellers have imagined more of Tinker Bell’s life experiences and interpreted them across a wide array of mediums, from hand-crafted watercolors to cutting-edge computer-generated imagery. You might even catch a glimpse of Tinker Bell flying across the night sky in the newest nighttime spectacular at Magic Kingdom Park, “Disney Enchantment.” No matter how, or where, you see Tinker Bell, her mere presence indicates that enchantment is on the way.

Tinker Bell’s newest artful incarnation can be found between Cinderella Castle and Liberty Square in the heart of Magic Kingdom Park at Walt Disney World Resort. There, as part of the “Disney Fab 50 Character Collection” of sculptures honoring The World’s Most Magical Celebration, she holds pride of place near the key characters of Mickey Mouse, Minnie Mouse, Donald Duck, Daisy Duck, Pluto, Goofy, and Chip and Dale. Who better to add to the festivities at this central location than the world’s favorite fairy, sparkling with an incandescence all her own?

For an in-depth look at Tinker Bell’s history, we recommend “Tinker Bell: An Evolution” by Mindy Johnson (Disney Editions, 2013).