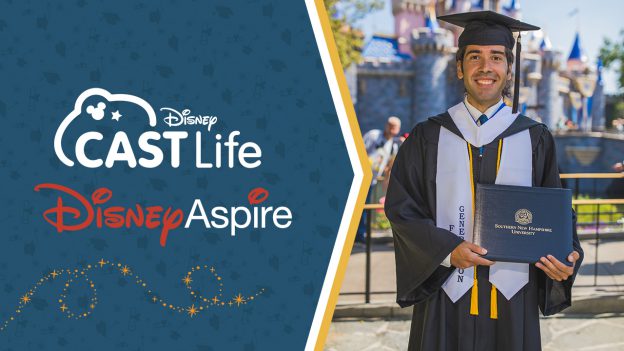 “I’ve been trying to get involved with special events my entire Disney career … so, for the past 10 years,” Teddo shared. “I was so grateful for the opportunity to interview for the role, and truly feel that the new doors that are opening for me as a recent graduate are incredible.”

Although Teddo did not initially intend to pursue further higher education upon completion of an associate degree in 2015, he decided to go back to school the year before the Disney Aspire program began. After facing high out-of-state tuition fees at institutions around the country, he was grateful for the 2018 launch of Disney Aspire, which pays full tuition up-front and reimburses fees for eligible hourly cast. He received his degree from Southern New Hampshire University last Nov., making him the first person in his family to obtain a bachelor’s degree.

“The academic program itself made me feel super nervous, as I’d never done online classes before,” he said. “But the Guild, [Disney] Aspire and Southern New Hampshire teams were really dedicated to making sure that I was on track and doing the best that I could.”

Teddo finds being a first-generation graduate an immense honor and, along with a new body of work through a varied portfolio and new role, he now has a triumph he can take with him throughout his career.

“I never in my entire life thought I would have a bachelor’s and be a first-gen graduate,” Teddo shared. “Because of Aspire, I’m able to hold my head up a little bit higher than I ever have before.”

Disney Aspire is the most comprehensive education investment program of its kind, offering 125+ programs at a network of educational institutions nationwide. As part of The Walt Disney Company’s commitment to supporting its employees and cast members, Disney Aspire puts #DreamsWithinReach by removing key barriers to enrollment and inspiring career mobility. For more information about Disney Aspire, or to sign up, eligible Disney employees and cast members can visit aspire.disney.com.