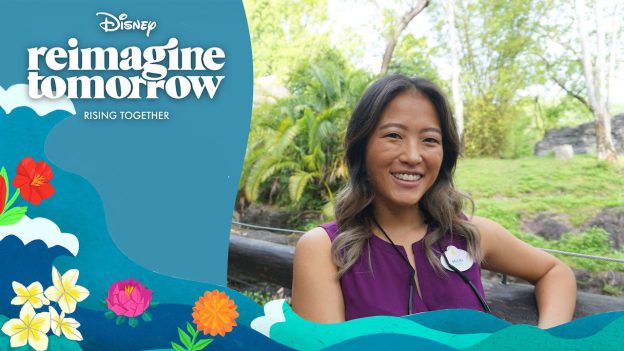 At Disney, our longstanding commitment to diversity, equity, and inclusion reflects our employees’ actions and passion for representation across our workplace, in the content we share and in the communities in which we operate.

In that spirit and throughout Asian American, Native Hawaiian, Pacific Islander Heritage Month in May, we’re honoring the culture and contributions of the Asian American, Native Hawaiian and Pacific Islander cast members, crew members, and Imagineers at Disney Parks, Experiences and Products across the globe and how they bring unique perspectives to their roles.

One of those cast members is Micki Yasuda, a mechanical engineer at Disney’s Animal Kingdom, who works on the safety and reliability of park attractions. As a child, Micki often visited Walt Disney World with her family, which lit a spark in her to one day work for “The Most Magical Place on Earth.”

Micki’s Disney career began with the Disney College Program at Gorilla Falls Exploration Trail, where she shared our conservation efforts about the animals with our guests. She later accepted an internship with a mechanical engineering team. “Disney inspired me to get into engineering,” Micki shared. “I was always so fascinated by the rides and wanted to know how they work.”

Not only is Micki passionate about her career as an engineer, she also has a passion for diversity and inclusion and loves sharing her culture with others. With honesty, vulnerability and open-mindedness, Micki brings her authentic self to work each day and in doing so,  spends less time worrying about who she thought she should be and more energy toward being who she wants to be – the best engineer, friend, cast member and leader possible.

As she got older, Micki wondered whether engineering was the right fit for her because she was told many times that she didn’t fit the ‘engineering mold’ and that she was too outgoing but Micki stuck with her passion. “I was expected to fit into a mold of who I should be and what I could do, but I refused to accept that. That is one of the reasons  why it’s so important for us to support one another.”

Now Micki advocates for others and shares her commitment to diversity, equity and inclusion whenever possible. Her activism stemmed from the attacks Asian Americans faced during the pandemic, leaving Micki distressed, heartbroken and scared.

“What was happening forced me to confront my feelings, which I realized resulted from being different. I hope that speaking out encourages others, who have similar emotions, to do the same and know they are not alone,” Micki said.

Stay tuned to the Disney Parks Blog and follow along on social, @DisneyParks, for more inspiring stories like Micki’s throughout Asian American, Native Hawaiian, Pacific Islander Heritage Month and beyond.