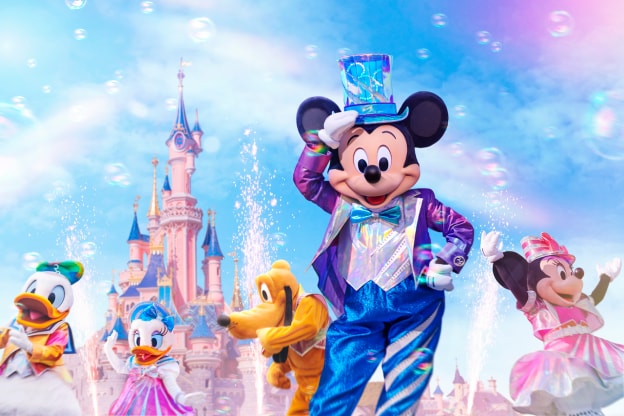 Come for the unique attractions, scrumptious food and beverage, and magical character interactions and stay for the stellar shows at Disneyland Paris. In fact, it’s almost showtime, so let’s get this show on the road and check out a few of our favorites you can’t miss in both Disneyland Park and Walt Disney Studios Park!

1. Prepare Your Dancing Shoes for “Dream… and Shine Brighter!”

This joyful daytime show created to celebrate Disneyland Paris’ 30th Anniversary transforms Central Plaza into a colorful extravaganza with more than 30 dancers and Disney Characters, new floats, two new unforgettable songs, and even a fun mashup of 20 fan-favorite Disney songs. While happily celebrating during the main scenes — smile and laugh louder, open your heart, and believe in your dreams — it’s also the perfect opportunity to catch Mickey and Friends in their iridescent 30th Anniversary costumes.

2. Answer the Call at “The Lion King: Rhythm of the Pride Lands”

Inspired by the beloved animation film, “The Lion King: Rhythm of the Pride Lands” was created especially for Disneyland Paris. From stunning choreography to original costumes, this one-of-a-kind experience shares the adventures of Simba, Nala, Rafiki, Timon, and Pumbaa through song, dance, acrobatics, and percussion, on a unique theater stage equipped with impressive 360° audio technology.

3. The Dazzling Delight of “Disney D-Light”

For the first time at a Disney park, “Disney D-Light” features 150 synchronized drones soaring above Sleeping Beauty Castle to form the resort’s 30th Anniversary logo prior to the nighttime spectacular  “Disney Illuminations.” This iconic celebration was no easy feat bringing to life, requiring 8 months of production, 66 musicians at Abbey Road Studios in London to create and produce the music, 42 fountains, 12 video projectors, 3D mapping, and new pyrotechnique design — just to name a few!

4. The Enchanting Tale of “Mickey and the Magician”

Featuring Mickey as you’ve never seen him before while he attempts to become a magician, with the help from magical Disney characters like Genie from “Aladdin,” Lumière from “Beauty and the Beast,” or Elsa from “Frozen.” “Mickey and the Magician” is a visual and musical feast awarded the prestigious IAAPA Brass Ring Award. Full of spellbinding illusions and special effects, this wonderful show will take your breath away.

Join your favorite Disney Junior heroes for a state-of-the-art show at Walt Disney Studios Park. Here families are invited to make dreams come true, singing along to catchy tunes with Mickey, Minnie and Timon, and even Disney Junior’s rising stars Vampirina and Fancy Nancy Clancy. To be sure as many guests as possible can join in the fun, “Disney Junior Dream Factory” is presented every weekend with actors specializing in “chansigne” – a form of artistic expression in sign language, bringing more inclusion to this amazing show.

Join Anna, Kristoff and the people of Arendelle in surprising Elsa! From a cozy barn in Arendelle to the royal Ice Palace, “Frozen: A Musical Invitation” is a beautiful immersion of the highly popular animated movie. This heartwarming adventure encourages the whole family to sing and dance along to classic Frozen songs, such as “Reindeers are Better than People,” “Love is An Open Door,” and “Let It Go.”

There’s truly no shortage of showstoppers at Disneyland Paris! Now, which one would you spotlight as a must-see?