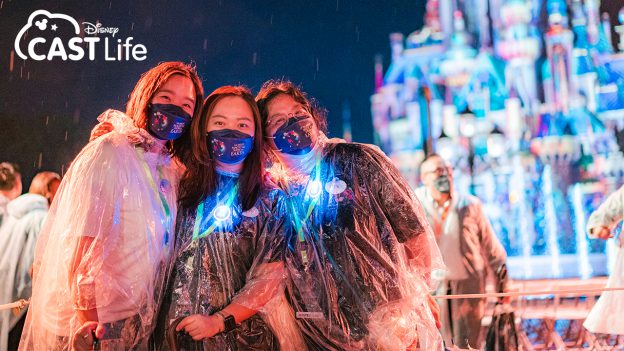 The night sky of Hong Kong Disneyland was illuminated with stunning lights, pyrotechnics and fireworks as “Momentous,” the resort’s all-new nighttime spectacular, made its long-awaited debut and took guests on a journey throughout life’s precious moments.

Over the last month, our magical cast of Hong Kong Disneyland celebrated the launch of “Momentous” with special experiences just for them. Prior to the show’s debut, they participated in different events along the way, from exclusive reveals to a special preview of the nighttime spectacular itself.

In May, cast members joined Hong Kong Disneyland’s Magic Post Playgroup, a group of passionate cast that share positive news throughout social media as brand advocates, and were invited to the Creative Reveal. During the event, the creative concept and behind-the-scenes stories about “Momentous” were shared, much to the excitement of our cast members.

Leading up to the show’s debut, a series of teaser activities were kicked off backstage to build cast’s knowledge and excitement. Resources and learning materials about the nighttime spectacular were shared, including videos, dialogue comics, and even giant billboards in their office space. With just weeks to go, our cast grew more and more excited about the debut of “The Most Magical Show on Earth.”

What better way to give our cast the ultimate “Momentous” experience than letting them see the show before anyone else? One hundred cast members were invited to the premiere of “Momentous,” and a very special party just for cast members and their families was held before the show’s release, an event that showed appreciation for their dedication and commitment to the resort.

Alex Clifton, Executive Director of Entertainment & Costuming at Hong Kong Disneyland, said the show “brings a signature event to our park at night, right at the center of our park with the Castle of Magical Dreams as the background.” He continued, “As a father and husband, I feel so proud and special to bring my boys and wife to enjoy the dress rehearsal of ‘Momentous’ together!”

Cast member Joey echoed a similar sentiment after attending the cast party: “I’m glad to be able to bring a super Disney fan, who is also a former cast member, to join this biggest cast party in years,” she said. “He’s been waiting for this spectacular for a long time and we both love the show — truly magical!”

This exclusive party included special entertainment activities, dining and shopping offers, and of course a preview of “Momentous” as the finale. Michael Moriarty, managing director of Hong Kong Disneyland, together with other senior leaders of the resort, were in attendance to celebrate with the cast.

And that wasn’t all! We invited cast members around the world to celebrate this “Momentous” occasion, as we launched a virtual screening for our fellow cast to join and watch a special sneak preview of the entire show before guests.

“What an incredible show!” said Alice, a cast member from Anaheim who was able to watch the nighttime spectacular from home.

Paula, another cast member from California, was thankful for the opportunity to watch along with her fellow cast on the other side of the globe. “Such a beautiful and moving show – I hope to get to visit Hong Kong Disneyland one day to see it in person! I really love how the message of the theme song touches so many aspects of our life’s journey – especially over the past few years.”

It was truly a celebration like no other. Just like the show, we journeyed together through so many different events and experiences, all to come together and celebrate as one cast. “Momentous” has helped remind us to “live the moment and love the memory” through all of life’s experiences as we continue to make more memories, not only for our guests, but for all of us cast members.

Here’s to the most amazing, magical and MOMENTOUS future!