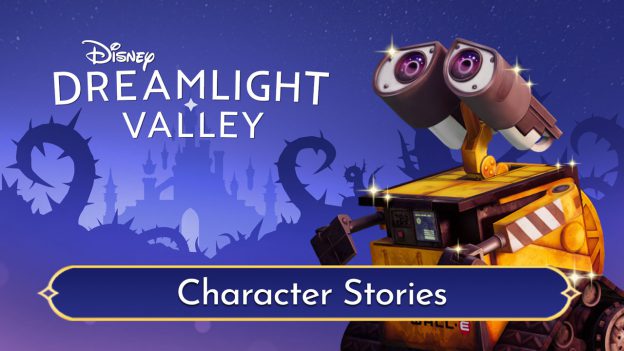 Be Friends with WALL•E in Disney Dreamlight Valley Game

I can’t believe we are a little over a month away from the launch of Early Access for Disney Dreamlight Valley! It feels like just yesterday that we revealed this charming new game. Since then, the team at Gameloft, in collaboration with Disney and Pixar Games, has been working diligently to bring you the most enchanting life-simulation adventure game you could ever hope for. As seen in the new gameplay overview trailer, your neighbors in the Valley could be some of the most well-known Disney and Pixar characters like Donald Duck, Ursula and WALL•E, amongst a number of others you’ll soon be able to discover!

Speaking of my favorite little robot, we’ve got the exclusive from Disney Dreamlight Valley Community Manager Rachel on how to add WALL•E as a resident to your Valley community and a sneak peek at how to build in-game character friendships.

And with that intro, take it away, Rachel and WALL•E!

Hi, Disney Parks Blog readers! Today we’re taking you through a series of quests alongside the much beloved small service robot.

What quests are those exactly? Character story quests of course!

We haven’t been subtle in sharing you’ll have the opportunity to visit WALL•E in his Realm inside the Dream Castle and that you’ll be able to bring him to your Valley. But what if we told you your adventures with him don’t stop there? In fact, every character in Disney Dreamlight Valley has a rich story arc that begins in their Realm (or wherever else you find them…) and continues as you grow your friendship with them. And not only is their story tied to your friendship with them, but your friendships with everyone else as well!

Now, fair warning—while we’ve been careful to hide some of the magic—there are some spoilers ahead as we delve into WALL•E’s story in Disney Dreamlight Valley.

You won’t have to take your adventures across the galaxy to find WALL•E’s Realm! Once you’ve unlocked his Realm door in the Dream Castle, you’ll be able to enter a familiar world that he has been working diligently to restore.

That said, even heroes need help sometimes, and unfortunately, our hero has gotten himself a bit stuck.

After you’ve gotten WALL•E back on track (by restoring his damaged track, of course), you’ll take over his task of clearing garbage from the Realm. Since you don’t have your own built-in trash compactor, you’ll need to dig up garbage using your Royal Shovel and bring back some green to the land with your Royal Watering Can.

WALL•E’s Realm isn’t the only one to use tools though; each Realm in the Dream Castle will have puzzles that challenge you to use your tools in unique ways to help its denizens.

Before they move in, every new neighbor to your Valley will need at least two things: a place to call home and a friend. WALL•E is no different. When he’s ready to leave his Realm, he’ll ask you to place his home somewhere in Dreamlight Valley. This is your dream Valley however, and you’ll be able to place his WALL•E Transport Vehicle shaped house anywhere you want! And not to worry—if you feel like you’ve found a better spot for WALL•E’s home (or any other character’s home) you can move them to any biome as you see fit.

With WALL•E ready to move in, it’s time to introduce him to a new friend (other than yourself) and who’s better at warm welcomes than Goofy?

You’ll have the opportunity to oversee a conversation between the two and this isn’t something that’s limited to WALL•E and Goofy. The characters in Disney Dreamlight Valley will engage in conversations with each other just as you would with them. Additionally, their own quest lines will cross over from time to time, so make sure to talk to them as often as you can!

Once WALL•E has moved in, you’ll be able to interact with him and watch him interact with your Valley and other characters—but his story doesn’t stop there! As you level up your friendship through activities and gifts, he’ll come to remember his core memories of Dreamlight Valley before the Forgetting. Chief among these memories is an old garden he used to take care of!

With the garden repaired, WALL•E will provide you with fresh resources automatically each day. There are many other forgotten secrets hidden in The Valley that you’ll need to build friendships to unlock. With magic and patience, you’ll uncover how each character contributes to the rich ecosystem of Dreamlight Valley.

We can’t wait for you to explore the rest of WALL•E’s quest arc and what the other characters in your Valley have to offer. Of course, WALL•E’s story in Disney Dreamlight Valley doesn’t stop there, but we have to leave SOME things for you to discover yourself on when the game launches in Early Access on September 6th! To make sure that you’re amongst the first to meet WALL•E and friends, wishlist Disney Dreamlight Valley today!

Thank you, Rachel! I may have already beat you to the wishlisting punch to download the game on Nintendo Switch! For everyone else who is just as impatient as me, be one of the first players to explore Dreamlight Valley during the game’s early access phase and receive exclusive rewards that you can keep once the game officially launches next year.

Disney Dreamlight Valley will be fully available next year as a free-to-play title for Nintendo Switch™, PlayStation®5 (PS5™), PlayStation®4 (PS4™), Xbox Series X|S, and Xbox One as well as PC and Mac users on Steam, Epic Games Store, Microsoft Store, and the Mac App Store.