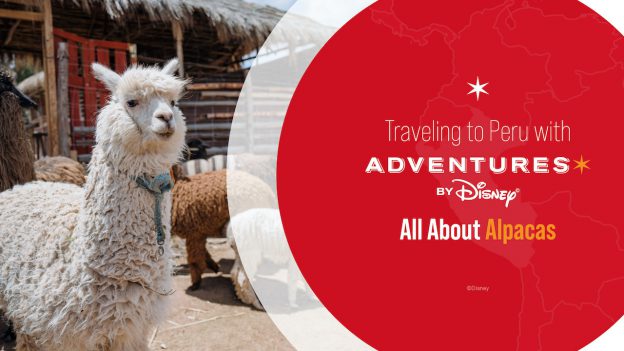 Going to Peru with Adventures by Disney

Get ready to “alpaca” your bags! Today, we’re celebrating alpacas, the adorably cute, fluffy animals that you’ll discover on our Adventures by Disney trip to Peru.

On this adventure, you’ll also meet the alpacas’ relatives found in Peruvian Andes: llamas and vicuñas. I bet some of you are wondering what a vicuña is … well, on our Adventures by Disney trip to Peru, you get to learn so much more about these fascinating creatures! For example, did you know the vicuña is the alpaca’s wild ancestor and it’s the Peruvian national animal?

But now, back to alpacas.

Alpaca or llama? Helpful tips when comparing the two:

These are just some of the differences when comparing the species in the Camelid family.

And now more about alpacas and llamas

While we only spend one day at the textile museum on the Peru Land Adventure, there’s no shortage of alpaca (and llama) sightings throughout this eight-day adventure in South America. For example, you might just spot a few when visiting Machu Picchu or see them roaming Cusco (not to be confused with Kuzco from the Disney animated film “The Emperor’s New Groove” … although, Kuzco does spend a significant amount of time as a llama in that film, so I suppose he’s relevant to this post.)

Want to meet a pack of alpacas or lots of llamas in Peru?

You can travel on this itinerary with Adventures by Disney along with up to 40 new friends on a Land Adventure or with your own personal group of your choosing on a Private Adventure. Learn more about #ABDinPeru by visiting AdventuresbyDisney.com.

And just for fun, we’re throwing in a llama face because it’s too cute not to share.