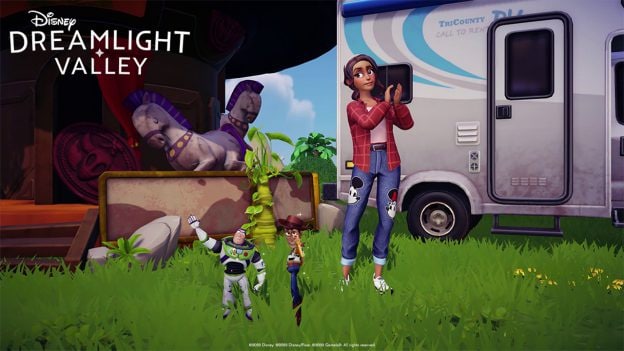 Shrink Down to Toy Size in Disney Dreamlight Valley!

Today, Gameloft announced a major content update for Disney Dreamlight Valley! In case you’ve forgotten, Disney Dreamlight Valley is a life simulation adventure game where you can live magically alongside iconic Disney and Pixar characters. Embark on your enchanting journey today as the game has just launched in Early Access. Your village will be primed and ready once the Toy Story Adventure is available. Inspired by the “Toy Story” franchise, explore Bonnie’s bedroom and solve special quests with Buzz Lightyear and Woody.

Woody and Buzz Lightyear both need your help! Step on through to the “Toy Story” realm where you’ll find yourself shrunk to toy-sized in Bonnie’s room where Buzz and Woody mistake you for a toy too! To invite them to live in your Valley, you must help Buzz and Woody complete three special quests and learn what being a good toy is all about.

Once Buzz and Woody have moved in, you’ll be able to interact with them by leveling up your friendships through activities and gifts and watch them interact with other characters—but their story doesn’t stop there! Help both Buzz and Woody find their footing in your larger-than-toy life Valley.

Disney Dreamlight Valley is available to play in early access today with the purchase of Founder’s Pack for Nintendo Switch™, PlayStation®5, PlayStation®4, Xbox Series X|S, and Xbox One as well as for PC and Mac users on Steam, Epic Games Store, Microsoft Store, and the Mac App Store. Explore Disney Dreamlight Valley during the game’s early access phase and receive exclusive Founder’s Pack rewards only available now that you can keep once the game officially launches next year.