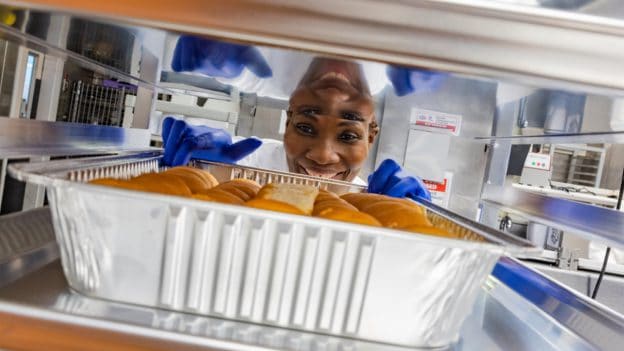 4 Ways Walt Disney World Cast are Giving Back This Thanksgiving

It’s the season of giving here at Walt Disney World Resort and cast members are once again putting Central Florida first as we gear up for one of our favorite holiday traditions: our annual Thanksgiving meal service at Coalition for the Homeless of Central Florida.

For nearly 25 years, the Disney culinary team has prepared home-cooked meals for hundreds of residents to enjoy, served by cast volunteers – or Disney VoluntEARS – as part of this special tradition we look forward to each year.

“We couldn’t do what we do without the help of our community partners like Disney,” said Allison Krall, President & CEO of Coalition for the Homeless of Central Florida. “We love seeing Disney VoluntEARS at the shelter, and it’s especially uplifting to see the extra magic they bring to our residents on Thanksgiving evening.”

This year, we’re building on these efforts and chefs are also preparing all the traditional fixings for residents at Harbor House of Central Florida, an organization that helps pull people to safety and hope from domestic abuse.

And what’s a Thanksgiving meal without dessert? We’re teaming up with Osceola Council on Aging to bring some tasty treats to more than 200 displaced seniors who were impacted by Hurricane Ian. Since the storm, we’ve continued supporting this organization through monetary and critical resource donations including food, water, blankets, hygiene products and more. Learn more about these relief & recovery efforts on the Disney Parks Blog.

“When we had to cancel our annual fundraiser due to Hurricane Ian, Disney stepped in to cover our full fundraising goal,” said Wendy Ford, President & CEO of Osceola Council on Aging. “From monetary support to ensuring displaced seniors have a memorable Thanksgiving meal, we couldn’t be more grateful.”

For some extra hands-on helping, Disney VoluntEARS are working alongside Heart of Florida United Way as we pack more than 4,000 meal kits for residents in Orange, Osceola and Seminole counties. Celebrating its 40th anniversary this year, the Disney VoluntEARS program plays a huge role in the Disney Cast Life experience, providing opportunities just like this for cast members to make meaningful impacts on our community and inspire optimism and hope for all who call Central Florida home.

It’s hard to put into words just how special it is to see the efforts of so many cast members coming together in such a big way for our community – and all of this joins the more than 170K volunteer hours spent in the community and $5.5 million given since the start of the 50th Anniversary celebration.