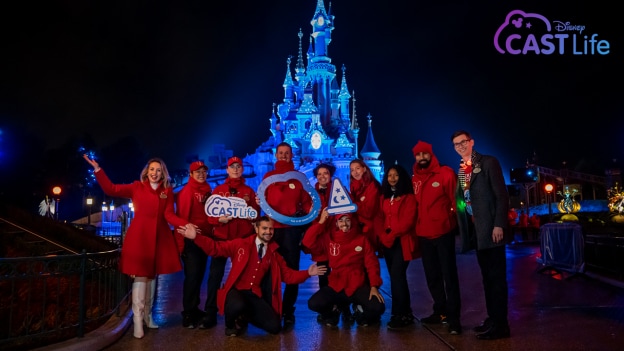 It’s Christmas before Christmas! To celebrate the return of “Disney Dreams! of Christmas” show spectacular, Disneyland Paris cast were invited to an exclusive Disney Cast Life moment that allowed them to be the very first audience to attend the final rehearsal of the show at Disneyland Park.

“We are so excited to share this special moment with all cast members as we are getting ready to bring back this amazing show – exclusive to Disneyland Paris – and you’re the first audience to see it,” said David.

Shortly after, one thousand cast members were able to enjoy a private showing of the sequence of magic “Disney D-Light” – recently awarded as Best Live Entertainment of the Year – and of the nighttime show “Disney Dreams! of Christmas” one week prior to its official launch to guests on Nov. 12 as part of the Disney Enchanted Christmas season.

At the event, cast had the opportunity to take part in the magic of the holidays by donating one or more toys to families in need. Disney VoluntEARS will be distributing the toys to several hospitals in France during the holiday season. Léa, a merchandise project manager who took part in this heartwarming event shared that for her, “the spirit of Christmas is to make this time of year magical for those who need it most.”

We’re continuing this tradition of delivering joy with the Disney Ultimate Toy Drive and give back this holiday season around the world. You can learn more at Disney.com/toydrive.

This is just one example of how our parks are giving back this holiday season. Over at Hong Kong Disneyland, they will be launching a “Give A Toy Share The Love” Christmas Toy Donation Campaign. Cast members will be invited to donate new toys and Hong Kong Disneyland will contribute an additional toy per each donation. The joy of giving will be felt worldwide!