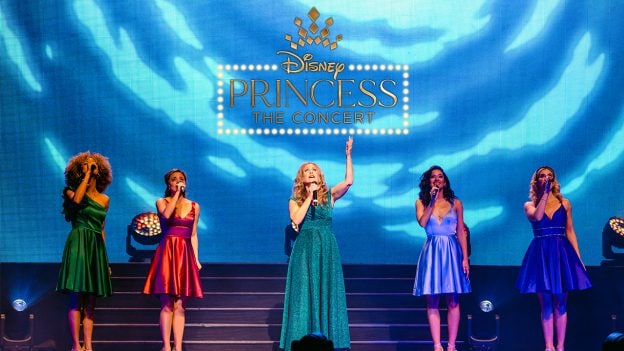 Thirty-three years ago today, Disney’s “The Little Mermaid” from Walt Disney Animation Studios made a big splash in theaters, introducing us all to the beloved Princess Ariel. Since then, Disney Legend Jodi Benson, who lent her voice as the original speaking and singing voice of Ariel in the classic animated film, continues to carry-on Ariel’s courage, kindness and inclusivity to all.

During a recent visit to Walt Disney World Resort, Jodi surprised one lucky audience with a dazzling performance of “Part of Your World,” joining the talented cast of “Disney Princess – The Concert” during their appearance in Orlando, Florida, at the Dr. Phillips Center for the Performing Arts.

“Disney Princess – The Concert” continues to dazzle audiences across North America in its Fall US 2022 Tour. Trust me, you do not want to miss hearing these gorgeous renditions of classic Disney Princess and Frozen songs performed by an incredibly talented cast of Broadway stars!

This one-time special performance of “Part of Your World” was made extra special by the recent release of Jodi’s new book “Part of My World: What I’ve Learned from ‘The Little Mermaid’ about Love, Faith, and Finding My Voice.” This book is a treasure trove of colorful characters and unforgettable anecdotes and a captivating glimpse behind the curtain at the making of the classic animated film, “The Little Mermaid.”

“I never wanted to write a book; in fact I declined the first time I was approached on it” Jodi recalls about first being approached to author ‘Part of My World.’ “But then I decided to use it as an opportunity to shine a light on other people who have helped me along my journey, particularly Howard Ashman. I wrote this book as a love letter to Disney and the little mermaid who changed my life, and I hope people will find encouragement in the lessons I’ve learned throughout my journey.”

Jodi shared more about her book, “Part of My World,” in a recent visit to Disney California Adventure Park, home of her favorite attraction: The Little Mermaid – Ariel’s Undersea Adventure.

Jodi feels honored to be part of the legacy of Ariel and is thrilled to see this character reimagined by Halle Bailey in the upcoming live-action film from The Walt Disney Studios, “The Little Mermaid,” releasing to theaters May 26, 2023.