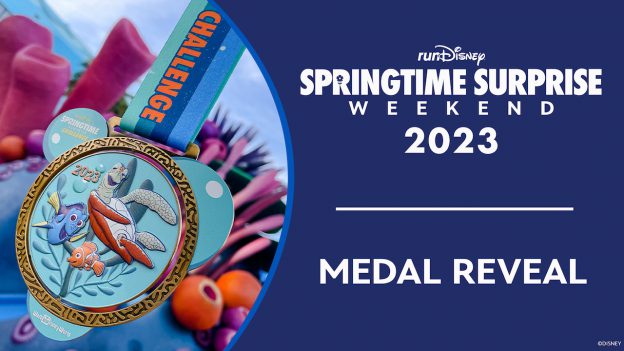 Just keep running, just keep running! Grab your exit buddies and get ready to put some fun in your run during the 2023 runDisney Springtime Surprise Weekend taking place April 13-16, 2023. The final event in the 2022-2023 runDisney race season celebrates the power of friendship and the magic of Pixar with the Pixar Pals. Racers are encouraged to celebrate the running buddies that keep them going, the support systems that cheer from the sidelines, and the iconic characters that lift each other up time and time again.

Gear up to rip it, roll it and punch it all the way to the finish line with a first look at the event’s finisher medals that will make you go “like woaaahh!” Take a look:

You are SPEED. Whether you’re aiming for a leisurely jog or a personal record, get ready to speed through the lanes of this 3.1-mile course with Lightning McQueen, Mater, and all their friends!

It’s time to get those scary feet ready! Cannisters at each mile marker get fuller and fuller as racers take a step in the “fright” direction through a 6.2-mile course with Mike, Sulley, and all their friends from the world of Monstropolis.

Saddle up for a 10-mile event! Racers set out on the adventure of a lifetime with Buzz, Woody, Bo Peep, and more as they push themselves to infinity and … the finish line!

Just keep running, just keep running! Racers with the perseverance to complete all three-weekend events are awarded for finishing the runDisney Springtime Surprise Challenge, complete with a medal featuring Nemo and his friends from all over the big blue world.

Interested in joining in the FIN-tastic race weekend fun? Limited spaces remain for the Disney Pixar Toy Story 10 Miler. Or choose to bring the magic home and run on a course of your choosing during the Virtual 2023 runDisney Springtime Surprise Weekend. From 3.1 to 19.3 miles, explore one-of-a-kind race options for a Pixar-filled at-home runDisney adventure!

Get ready to celebrate the magic of Disney and Pixar along with some of your favorite Disney and Pixar Pals during the 2023 runDisney Springtime Surprise Weekend! Which medal are you most excited to earn? Let us know at @runDisney on Facebook, Twitter and Instagram using hashtag #SpringtimeSurprise.