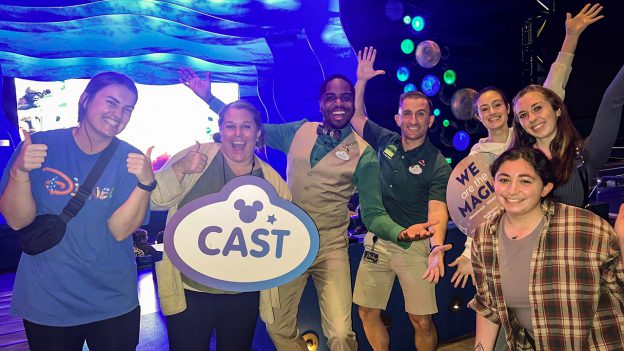 In an exclusive Disney Cast Life Preview, cast members got a special behind-the-scenes look at the second season of “Magic of Disney’s Animal Kingdom,” the compelling docu-series that provides an all-access pass to explore the magic of nature within Walt Disney World Resort, home to more than 300 species and 5,000-plus animals.

“As a cast member, it always feels special when you get to see or do something like this for the first time,” said Kilimanjaro Safaris cast member Jessica. “You really do feel the magic!”

At Disney’s Animal Kingdom, Theater in the Wild came alive with that energy and heartfelt emotion as Walt Disney World Ambassadors Ali Manion and Raevon Redding hosted an enchanted evening for cast members filled with inspiring storytelling and memorable experiences.

“Thousands of guests come into our parks every day and create lasting memories through fun experiences,” said Animal Health Director Dr. Geoff Pye, who led the onsite series production. “The series showcases everything that goes into one of those days and the passion of our cast striving to make it happen.”

The series also highlights Disney’s commitment to reducing our environmental footprint, caring for wildlife and their habitats, and creating experiences that inspire action. These collective efforts are known as Disney Planet Possible. Throughout each episode, viewers learn more about the tangible actions we take to support a world in balance and a healthier home for people and wildlife. That includes highlights from organizations supported through the Disney Conservation Fund and the work of Disney Conservation Team Wildlife, which works hand-in-hand with the animal care teams to deliver best-in-class scientific programs to conserve wildlife in Disney’s backyard and beyond.

“Through this series, we can show the important work we do collectively in providing the best care for animals here and our efforts to continue to protect animals in the wild around the world,” said Vice President of Disney’s Animals, Science and Environment Dr. Mark Penning.

For example, viewers this season will get a behind-the-scenes look at the successful ultrasound scan that helps teams monitor the pregnancy of Olivia, a pregnant okapi. Fans also learn about the rhinos at Disney’s Animal Kingdom Theme Park—along with rhinos at select accredited institutions around the U.S.—sporting an activity tracker very similar to the popular fitness trackers many of us have worn to track our daily steps and activity, but on a much larger scale, to see how rhinos spend their time.

Disney has brought people and nature together for nearly a century through inspiring storytelling and memorable experiences. The world is now able to connect with the magic of nature through the second season of Magic of Disney’s Animal Kingdom now on Disney+ or NatGeo every Friday at 10/9c p.m. for a new episode through March.

“The show is definitely something that we share with guests because it’s a way for them to experience some of what happens backstage,” shared Kara, a Wilderness Explorer cast member. “The show enables our guests to bring home the magic that they experience here.”