A Look at Silly Symphony Swings 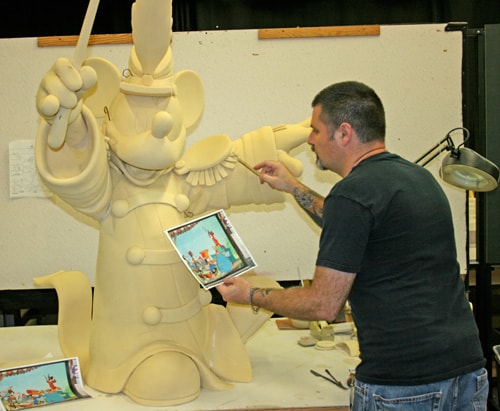 Many people have posted photos online of Silly Symphony Swings, a new attraction coming to Paradise Pier in Disney’s California Adventure park later this year. Today we’re giving you a chance to see how some of the magic happens behind the scenes. The photo above shows Walt Disney Imagineering Senior Dimensional Designer Steve Cotroneo sculpting a four-foot tall Mickey Mouse that you can now see at the very top of Silly Symphony Swings.

We’re also showing footage you’ll only see here on the Disney Parks Blog because only our cameras are allowed in the park at night to capture these close-ups of Mickey being placed atop the attraction.

For those of you who many not be familiar with the attraction, Silly Symphony Swings is a classic swing attraction, and it’s themed to Walt Disney’s animated short, “The Band Concert” (1935). In the musical cartoon, Mickey Mouse is trying to conduct a presentation of the “William Tell Overture” by Gioachino Rossini, but Donald Duck interrupts him and chaos follows. When Mickey finally regains control of his orchestra, they are all swept up in a passing tornado.

In the attraction, guests will see Mickey conducting the barnyard orchestra, and as a tornado passes through the Park, the central tower begins to rise and spin, and Mickey’s band concert really swings into high gear.