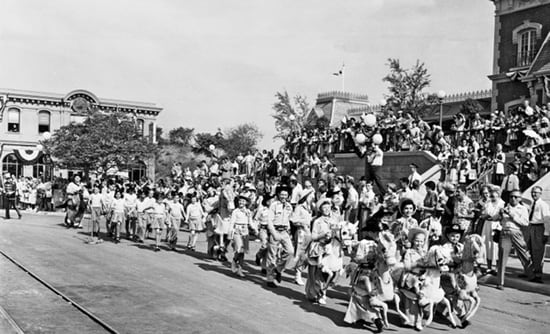 Do you remember the first time you saw the Mouseketeers?

The photo above shows the Mouseketeers’ first official public appearance on July 17, 1955, during the opening day festivities at Disneyland park. They were introduced to the American TV viewing audience for the first time during the live broadcast of opening day that was televised nationwide.

The Mouseketeers also performed during the opening day show with their very own musical production number. All 24 Mouseketeers performed the “Talent Round-Up” song at the Mickey Mouse Club Theater in Fantasyland, culminating in the soon to become familiar “Mouseketeer Roll Call.”

The Mouseketeers have returned to Disneyland numerous times throughout the years including reunions in 1980, 1990, 1995 and the 50th anniversary festivities for Disneyland park on July 17, 2005.

Do you have a favorite memory of “The Mickey Mouse Club?”