New Projection Show Turns ‘small world’ Into a Big Canvas, for ‘The Magic, The Memories and You!’ 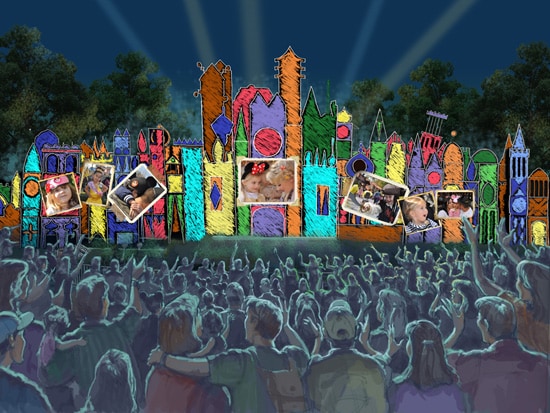 I’m going to tell you about a new show at Disneyland park that takes the façade of “it’s a small world” and does some amazing things. It turns it into an animated, coloring pad; it coaxes the singing dolls from inside the attraction to appear outside in the show; and it weaves hundreds of guest photos into a giant, surprise mosaic.

Even after I tell you about it, and we share a video sneak-peek of tonight’s first show, I must admit the real thing is so much better.

If you can get here, quit reading now and get here to see “The Magic, The Memories and You!” The nightly, 10-minute spectacular utilizes projection technology and animation to transform the architecture of “it’s a small world” in ways that will make you wonder what happened to the walls.

For those of you who can’t see the show right away, I’ll share a few more details. Also, check out Show Director Alan Bruun’s post about the same type of show he created for Cinderella Castle in the Magic Kingdom at Walt Disney World.

The nightly show combines guest photos from that day in Disneyland park with photos and videos taken from Disney’s “Let the Memories Begin” online hub. Classic Disney music is woven into the new “Let the Memories Begin” theme song, creating a musical and visual journey that traces the family vacation experience from surprise announcements through arrival and fun at the Disneyland Resort.

The show finale features a burst of fireworks over “it’s a small world.”

That’s what it looks like. It’s harder to tell you what the show feels like. Watching the photos will remind guests of all ages of their most cherished Disney memories, as a kaleidoscope of images is projected onto the “it’s a small world” attraction.

WHO: As part of the thousands of photographs projected each night, roughly 500 photos will be of guests who made memories in Disneyland park that day – resulting in a different “The Magic, the Memories and You” presentation each night.

WHERE: An ideal place to see the projections will be from the Fantasyland esplanade, which runs from the front of “it’s a small world” to the entrances of the Matterhorn Bobsleds and Mad Tea Party attractions.

WHEN: Tonight’s 6 p.m. “preview” show is a special preview, followed by the official debut at 7:30 p.m. The current show schedule is:

HOW TO PARTICIPATE: Your photo will be considered for that night’s unique show if you have your photo taken by a PhotoPass photographer during the day. You will have the option to decline participation in the show.

Tell us about some of your favorite photo moments at the Disneyland Resort.

Likes (1)
Share New Projection Show Turns ‘small world’ Into a Big Canvas, for ‘The Magic, The Memories and You!’