Imagine being 15 years old and cast alongside Captain Jack Sparrow in the latest “Pirates of the Caribbean” film! For actor Robbie Kay, no imagining is required – he really did “join Jack’s crew!”

Robbie is the youngest member of “Pirates of the Caribbean: On Stranger Tides” cast, and he plays the scrappy Cabin Boy who can hold his own with the best (or worst) of his shipmates on the Queen Anne’s Revenge. He even gets to prove that when it comes to guts, good things sometimes come in small packages. 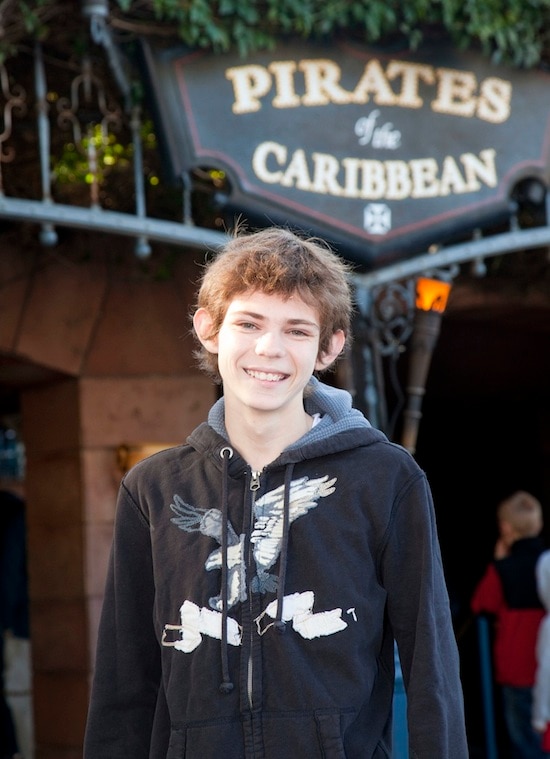 During a recent visit to Disneyland park, I met Robbie and his parents in New Orleans Square and he told me what it was like to work with Johnny Depp. “He’s a really, really nice guy to work with,” Robbie said. “I’ve never met anyone as big as him before, so it was a bit of a shock at first, but once I got used to being around him, you know, he was just such a nice guy – and it’s so cool to say that I got to work with him.”

On experiencing the Pirates of the Caribbean attraction for the first time, Robbie said: “It was so fun. I didn’t really know what to expect, I mean this is where this film franchise actually came from, and now they’ve added bits of the films into it, it’s so interesting. I liked it a lot.”

Look for Robbie on the big screen May 20, when Walt Disney Pictures’ and Jerry Bruckheimer Films’ “Pirates of the Caribbean: On Stranger Tides” opens in theaters in Disney Digital 3D™.