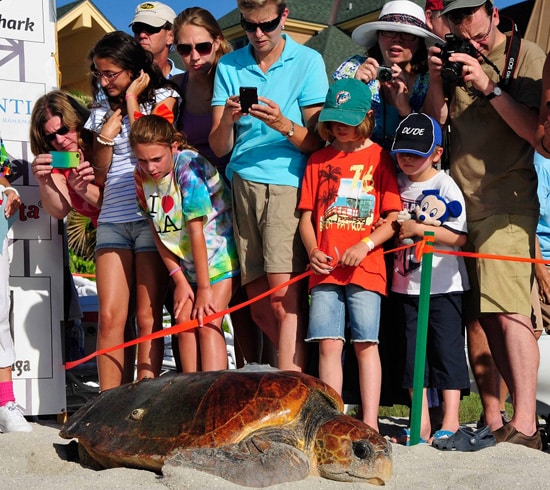 Last Saturday morning, Disney’s Vero Beach Resort guests experienced the wonders of nature and science when two loggerhead sea turtles named for Disney characters – who had laid their eggs on the beach the night before – returned to the sea. The turtles were fitted with satellite transmitters and released near the resort as part of the Sea Turtle Conservancy’s annual “Tour de Turtles” event.

Lightning McQueen is sponsored by Disney’s Animal Programs and Disney’s Vero Beach Resort, and Rapunzel is sponsored by the Disney Worldwide Conservation Fund (DWCF). Of the more than $15 million that the DWCF has distributed since the fund’s inception, almost $1 million has helped support sea turtle conservation around the world. 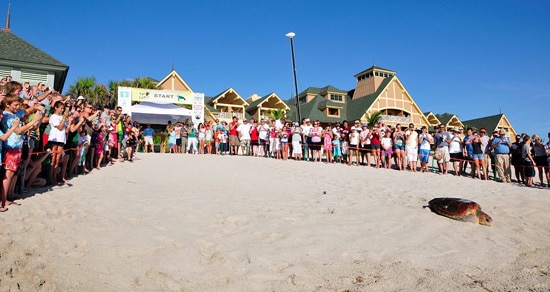 A program created by the Sea Turtle Conservancy, “Tour de Turtles,” follows the marathon migration of 15 sea turtles representing four different species from their nesting beaches to their foraging grounds. The goal of “Tour de Turtles” is to inspire people to care about sea turtle conservation.

Watch the video to see the huge send-off by more than 250 Guests.

Researchers from Disney’s Animal Programs and the Sea Turtle Conservancy will track the sea turtles using satellite telemetry as they travel from their nesting beach to various feeding grounds. Using this technology, scientists learn about sea turtles’ habits at sea and the different migratory patterns of each species. This knowledge helps researchers, conservationists and governing agencies make more informed decisions about sea turtle conservation actions and policies. Guests can find out about this research and follow the tracks of the turtles when they visit the Wildlife Tracking Center in Rafiki’s Planet Watch at Disney’s Animal Kingdom. People worldwide can view the sea turtles’ progress online at www.tourdeturtles.org.

Each year, approximately 50,000 female sea turtles come to lay their eggs in Florida, making our beaches one of the most important nesting areas in the world. Sea turtles are among the oldest creatures on earth and have remained essentially unchanged for 110 million years. In the United States, as much as 90 percent of sea turtle nesting occurs in Florida, which serves as a primary nesting site for several species of endangered and threatened sea turtles.