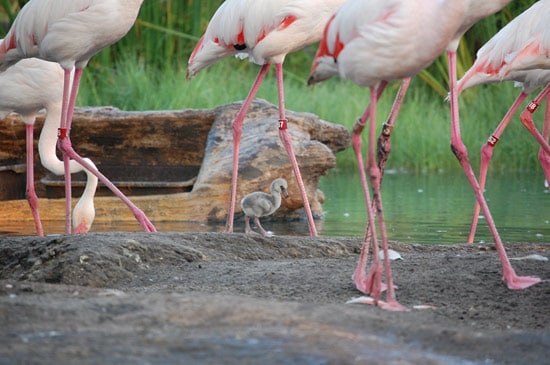 You could say that less is more for a flamingo chick hatched at Disney’s Animal Kingdom this past summer. The chick, a member of the lesser flamingo species, is being raised by our park’s greater flamingos, a larger flamingo species. How did a “lesser” wind up with the “greaters”? Here’s the story as told by animal keepers Kris Becker, Shawnlei Breeding and Laura Gruber. 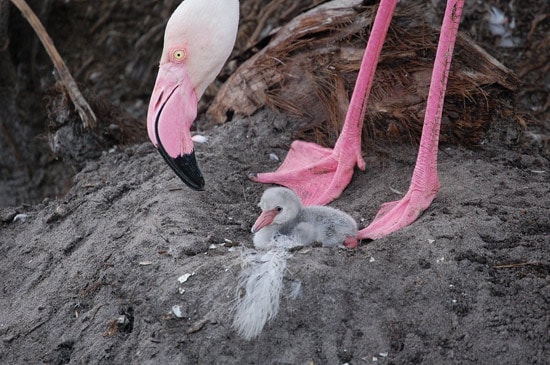 Disney’s Animal Kingdom celebrated the hatching of a female lesser flamingo on July 16, the first lesser flamingo to be hatched at the park. The egg was laid on June 19 in a habitat near The Tree of Life. While nest building and other reproductive behaviors have been observed over the past eight years within the lesser flamingo flock, this was the first time any eggs had been laid by the group. Due to a variety of factors, a decision was made to remove the egg from the nest and incubate it at our backstage Avian Research Center. Sixteen days later, the egg was placed under a pair of greater flamingos in their habitat on the Kilimanjaro Safaris whose egg had been determined to be nonviable. The greater flamingos were experienced parents who had previously raised chicks successfully.

These foster parents incubated the egg for another 11 days before it hatched. Their original egg was scheduled to hatch on July 3, so they sat an additional 13 days on the new egg. The chick continues to be fostered by the greater flamingo pair in a flock of 21 male and 23 female birds, as well as 7 greater flamingo chicks. Although small in stature, the lesser flamingo chick is big in attitude and fits in well with the rest of the flock.

Take a look back at more of Disney Parks’ conservation efforts: