Wildlife Wednesdays: Siamang with Twins is Father of the Year at Disney’s Animal Kingdom at Walt Disney World Resort

With Father’s Day approaching, our vote at Disney’s Animal Kingdom for father of the year is Kenny, one of our siamangs (a species of ape). Kenny has been raising his twin daughters, Veruca and Violet, since they were a couple of months old and doing a fantastic job under the watchful eyes of our animal care team. Twins are rare for siamangs. Mom began caring for one of the infants, and our primate team stepped in to help by hand rearing the other one.

Dad Kenny, who had demonstrated great parenting skills in the past, then took on the job of raising first one, then both of his daughters, with our animal keepers continuing to bottle-feed the infants until they moved on to solid foods.

While the twins look very much alike, they have very different personalities. Violet is the more dominant twin and definitely a daddy’s girl. She often wins during wrestling matches with her sister. Veruca is more laid back and does not typically hang out with dad as much. 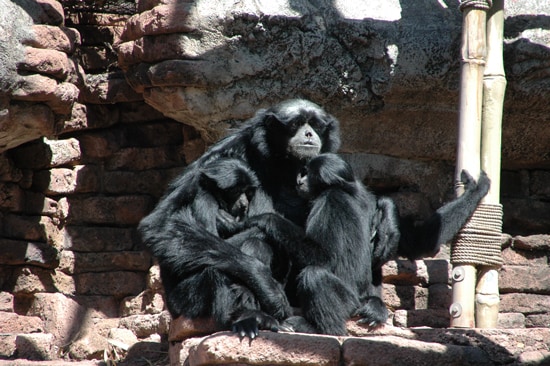 The twins will be two years old this fall and are doing great. Guests love watching them with their dad in the Asia area of the park as they wrestle with each other, play in the hammocks and try to wake dad from his naps. But don’t let Kenny’s sleepy demeanor fool you—he’s very aware of his surroundings and where the kids are and what they’re up to. Meanwhile, mom, Penny, and older sister, Bahiyah, are in their backstage habitat. Our primate team hopes to get the family back together in their habitat in Asia when the twins get a little older.

The team shot some video of Kenny and the twins at play in their habitat at Disney’s Animal Kingdom. Enjoy!