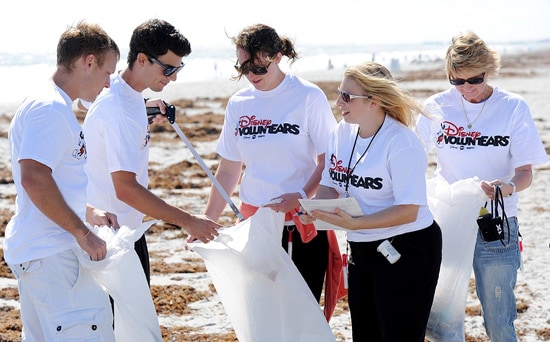 More than 300 Disney VoluntEARS and their families and friends created magic this past Saturday. They made nearly 2,000 pounds of trash along four miles of coastline in Brevard County, Fla., disappear! Okay, so the magic consisted of spending several hours scouring the beach for trash big and small – finds included lots of cigarette butts, plastic wrappers, fishing line and even a broken surf board – but the result was certainly magical both for the wildlife who call the coastline and ocean home and the people who visit the beach to enjoy nature. From the squeals of delight when a bottle cap, food wrapper or other bit of plastic was found, you would have thought this dedicated cleanup crew had found Captain Jack Sparrow’s buried treasure! 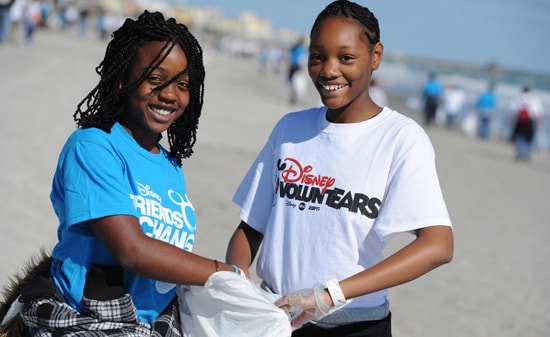 The VoluntEARS from the Walt Disney World Resort and Disney Cruise Line, who were taking part in the International Coastal Cleanup, worked alongside partners from the Ocean Conservancy, Keep Brevard Beautiful, the U.S. Coast Guard and the Canaveral Port Authority. We were especially pleased this year to be joined by “bigs” and “littles” from Big Brothers Big Sisters of Central Florida as part of the Disney’s Friends for Change program, which encourages kids, families and friends to do community projects together, including taking action to connect with and protect nature.

Did you know that it’s the little bits of trash that are most dangerous to wildlife? Sea turtles, birds and fish often mistake them for food. Here at Disney’s Animal Kingdom, at the Wildlife Tracking Center in Conservation Station, you can hear the story of Little Crush, a rescued sea turtle that came to us with a belly full of bits of plastic. Little Crush was successfully rehabilitated and returned to the ocean.

Participating in a local beach or waterway cleanup is a great way to protect wildlife and nature—and ensure that your area’s natural wonders will inspire and nurture future generations. We all can help too by reducing waste, using reusables instead of disposables, recycling everything possible and putting trash in the proper receptacles.

For more on Disney’s environmental and conservation efforts, visit www.disney.com/conservation.