In this Wildlife Wednesday series, you have heard from our conservation director Anne Savage, Ph.D., about our commitment to conservation and the projects we lead globally to help save species from becoming extinct.

I am very proud to share with you that Anne just received an extremely prestigious award in the field of conservation. Anne has been named one of this year’s Lowell Thomas Awardees from The Explorers Club. This esteemed award “celebrates explorers who exhibit excellence and innovation in conservation, with emphasis on emerging techniques and technologies that meaningfully contribute to our knowledge of the world and how we protect it.”

Whether helping educate guests at Walt Disney World Resort or contributing to wildlife and habitat protection around the world, Anne has helped lead Disney’s bold environmental approach as conservation director for Disney’s Animals, Science and Environment.

Anne has been the recipient of past awards, but with this new honor, she joins a century’s old society of celebrated pioneers and legendary explorers, including President Theodore Roosevelt, Charles Lindbergh, Chuck Yeager and Sally Ride. Wow.

Anne is very deserving of this exceptional award. She has been integral in the protection of cotton-top tamarins, a critically endangered primate found only in the tropical forests of Colombia. She has worked with the Colombian conservation group Proyecto Tití (a Disney Conservation Fund grant recipient) to develop a comprehensive, long-term strategy to protect wild cotton-top tamarins – arguably one of the best and well-rounded conservation programs in the world. 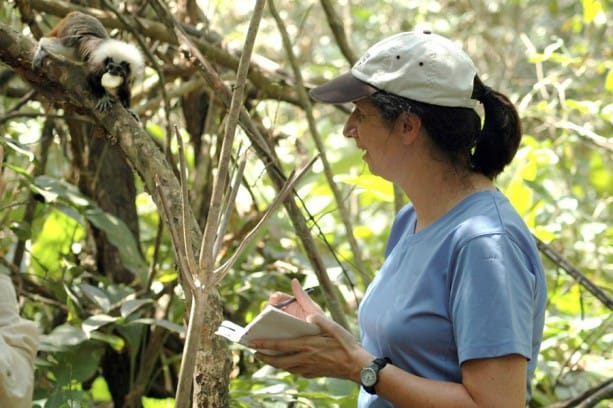 As part of this more than 25-year program, Anne and her team have helped inspire a national movement to save this small monkey. She her team have developed education and sustainable income-generating programs for the rural communities surrounding the tamarins’ forest habitat. Her team has been instrumental in establishing Aug. 15 as a Colombian national holiday known as “Day of the Cotton-Top.” And she has successfully worked with the government to establish protected areas that will help this species.

Have you seen the cotton-top tamarins at Disney’s Animal Kingdom? They are about the size of a squirrel with a large poof of white hair on their heads. The next time you visit, be sure to visit them on Discovery Island and Rafiki’s Planet Watch. You can even have a Starbucks flat white beverage at Creature Comforts right next to their habitat on Discovery Island – for every purchase, a donation is made to the Disney Conservation Fund!