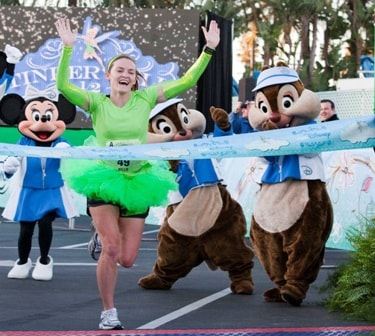 Kellie Nickerson – complete with fairy wings and a green tutu – flew away from the field to win the inaugural Tinker Bell Half Marathon at the Disneyland Resort today. Nickerson traveled from Albuquerque, N.M., to capture her first win at a runDisney race with a finish time of 1:27:52, just ahead of Sharon Wilkinson of Winnetka, Calif., (1:28:18) and Stacy Schafer from Carlsbad, Calif. (1:28:54).

The Tinker Bell Half Marathon, hosted by the city of Anaheim and the Disneyland Resort, led participants on a 13.1-mile trek through Disneyland and Disney California Adventure parks, as well as by several Anaheim landmarks. The first-year event featured music, entertainment, Disney characters and costumed runners donning fairy wings and plenty of pixie dust. Finishers received a commemorative Tinker Bell “wings’’ medal.

TV sitcom star Megyn Price (“Rules of Engagement”) and “Goonies,” “Lord of the Rings” and “Rudy” star Sean Astin were among the 12,000-plus registered runners to take part in this morning’s race.

Keep up with the latest on all runDisney races at runDisney.com.