On April 6 & 7, dance crews Outer Circle and We Are Heroes faced off in Week Four of TRON CITY’S DANCE CREW CHALLENGE. These two crews brought out their best moves hoping to secure their position in the semi-finals. After thrilling audiences for two nights at ElecTRONica, Outer Circle earned their place to move ahead and compete in our Championship weekend.

Starting on Thursday, April 12, Day One of TRON CITY’S DANCE CREW CHALLENGE, semi-finals will begin with dance crews TM Juniors, Kaba Modern, Klaamation and Outer Circle all competing against each other trying to earn your votes! You’ll want to be there when these teams rock the stage at 8:15 p.m. and 9:10 p.m.!

Day Two of TRON CITY’S DANCE CREW CHALLENGE, semi-finals takes place Friday, April 13, as our four dance crews leave it all on the stage hoping to be the top two teams to move on and compete in the finals. Catch them live at 8:15 p.m. and 9:10 p.m.!

The surviving dance crew will be announced via @Disneyland on Twitter on Saturday, April 14.

This all leads up to the finals on Saturday, April 14! That’s when our two winning dance crews from the April 12 & 13 semi-finals will compete against each other for one last night of incredible, heart-pounding dance competition! The challenge happens at 8:15 p.m. and 9:10 p.m.! 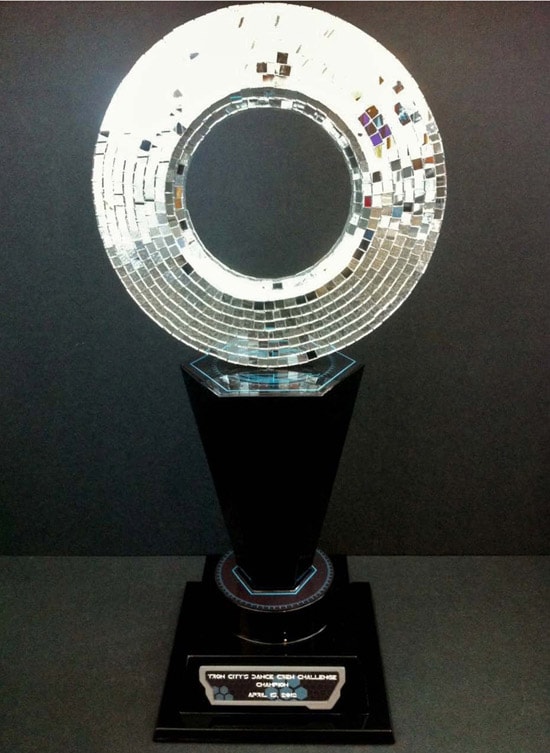 Then on Sunday, April 15, both teams will return for a special encore performance at 9 p.m.! That very night, just before the Portal closes on ElecTRONica for the last time, everyone will find out which team will take home the cyber-cool DISC-OBALL Trophy as TRON CITY’S DANCE CREW CHALLENGE Ultimate Champions!

The winner of TRON CITY’S DANCE CREW CHALLENGE will be announced via @Disneyland on Twitter on Sunday, April 15, just after the live announcement.

Voting will work the same as in the first four weeks of competition. Guests watching the performances will be instructed on how to cast their votes by using text messaging. Come check out the competition live—on the Power Surge Stage in Hollywood Pictures Backlot— and cast your vote for the dance crew you think should be called TRON CITY’S DANCE CREW CHALLENGE Ultimate Champions.

Programs! The final days of ElecTRONica have arrived! Come and experience all that the Grid has to offer. There’s no better time to get your TRON on before the ultimate End of Line on April 15.