After months of speculation and prognostication, we finally know this season’s Super Bowl XLIX champion: the New England Patriots. Well, I’m happy to reveal one other exciting piece of juicy information: star players of the big game – wide receiver Julian Edelman and cornerback Malcolm Butler – are going to Disneyland! 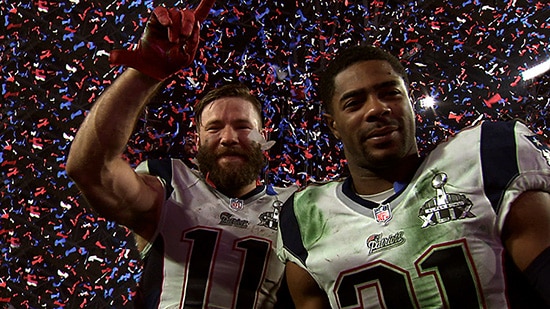 Immediately after the 28-24 victory over the Seattle Seahawks in Phoenix, Edelman and Butler stood on the field amid a sea of confetti and screaming fans and shouted those classic words: “We’re Going to Disneyland!” The scene is the centerpiece of Disney Parks‘ annual Super Bowl commercial that is airing for the next several days.

The TV spot is the 48th edition in the beloved series that began in 1987 when New York Giants quarterback Phil Simms first blurted out those words in front of a TV camera after Super Bowl XXI.

This year it was Edelman and Butler’s turn after remarkable performances Sunday night at University of Phoenix Stadium. Edelman had nine catches for a team-high 109 yards, including the game-winning touchdown reception in the final minutes of the game. Butler sealed the victory with a game-saving interception in the final seconds.

They are scheduled to celebrate their performances and their team’s victory with a hero’s welcome parade Monday down Main Street, U.S.A., at Disneyland park, which just last week was the site of the unveiling for the upcoming Disneyland Resort Diamond Celebration, marking the resort’s 60th anniversary. If you can’t make it out to Disneyland park to celebrate with them, then check back here Monday afternoon to see photos and video from the festivities and get a look at the TV commercial here.