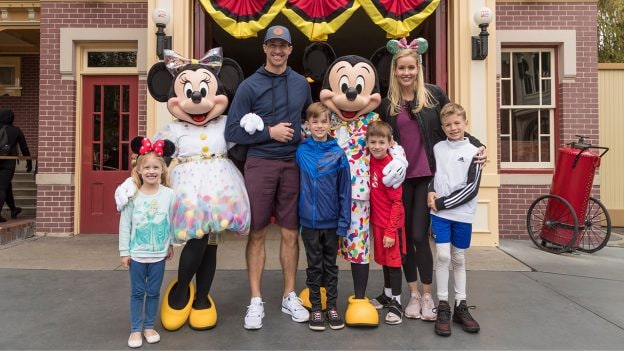 Earlier this week, New Orleans Saints quarterback, Drew Brees, and his family had a chance to celebrate with Mickey Mouse and Minnie Mouse during Get Yours Ears On – A Mickey and Minnie Celebration at the Disneyland Resort.

Drew, his wife Brittany, and their children (seen from left to right Rylen, Callen, Bowen and Baylen) are no strangers to Disney Parks. In fact, Drew mentioned they just visited Walt Disney World during his appearance in the 2019 Pro Bowl held in Orlando in January.

Monday’s visit was very special, as it marked the first time Drew and Brittany’s youngest child, Rylen, had been to Disneyland in Anaheim, Calif. Drew confessed they had surprised her, not letting her know the day’s destination until they arrived. The big smile on Rylen’s face says the secret preparations were more than worth it!