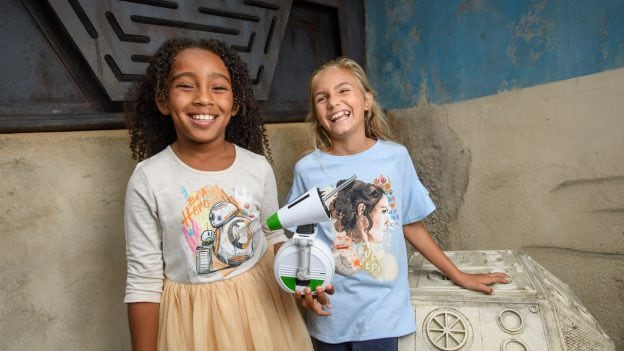 Triple Force Friday, the latest in an exciting tradition of Star Wars product launches, introduces a slew of all-new products coming to Walt Disney World Resort in Florida, Disneyland Resort in California and online at shopDisney inspired by the film, Star Wars: The Rise of Skywalker, the Disney+ series, The Mandalorian and the video game, Star Wars Jedi: Fallen Order!

Whether your young ones believe they are on the dark side or the light side of the Force, they will love wearing these new Star Wars: The Rise of Skywalker and The Mandalorian T-shirts available now at both the Disneyland Resort and Walt Disney World Resort.

You’ll be the most fashionable Jedi in the galaxy with these Star Wars: The Rise of Skywalker T-shirts for men and women. Pair one with some comfy Star Wars leggings featuring BB-8, D-O and symbols of the Resistance while you tote your hyperspace travel essentials in a Sith Trooper Loungefly crossbody bag.

Adults and kids alike can dress to defend and protect the Star Wars galaxy. Girls can follow the Jedi code in a “True Jedi” T-shirt or a “Be a Hero” dress. Ladies, channel your inner bounty hunter in a T-shirt featuring the Mandalorian, IG-11 and Cara Dune as you prepare for The Mandalorian series to premiere on Disney+ on November 12, 2019!

All three of these products are available now at Walt Disney World Resort, Disneyland Resort and online at shopDisney.com!

Imaginative play inspired by a galaxy far, far away… with these Star Wars Deluxe Figurine Sets, each featuring ten figures from Star Wars: The Rise of Skywalker!

Located in Southern California? You’re in luck! You can find these products and more at World of Disney in the Downtown Disney District, The Star Trader, Star Wars Launch Bay and the Emporium at Disneyland park and Elias & Co. at Disney California Adventure park! For those of you in Central Florida, you can find a wide range of products at World of Disney in Disney Springs, Keystone Clothiers, Star Wars Launch Bay and Tatooine Traders at Disney’s Hollywood Studios, MouseGear at Epcot and the Emporium at Magic Kingdom Park!

Stay tuned as even more products roll out over the next few months leading up to the releases of the new Star Wars stories including these MagicBands for both Star Wars: The Rise of Skywalker and The Mandalorian!

Join the conversation and use Triple #ForceFriday to share your Star Wars best with us!