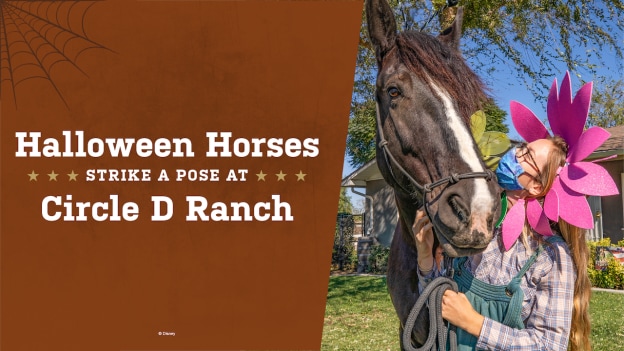 While Circle D horses and the cast members that care for them are used to having fun at the Disneyland Resort, current conditions called for a creative way to conjure up something wickedly wonderful to celebrate Halloween. So just in time for the spookiest day of the year, the majestic steeds of Circle D Ranch dressed to impress in costumes designed by their human cast member handlers. Oh hay!

Photographed in front of the vista of the Circle D ranch house, the horses donned various “looks” ranging from a Disney hero to an exotic mammal, as well as traditional amusement park steeds and even a tasty treat! Let’s take a look at the Disney equine fashion show:

First up above are Percheron Draft Horses, Chief and Chad, ridden by cast members Shana Miner and Jordan Nelson. These gracious grey beauties bedecked with flowers represent the traditional carousel horses loved around the world.

Next, Jack, a Percheron and Belgian Draft Horse mix, dons the stripes of the African mammal known as the okapi. Jack is accompanied by his zookeeper, cast member Alyssa Denison. Fun fact: although the okapi has striped markings reminiscent of zebras, it is most closely related to the giraffe!

Anticipating the upcoming holiday season, Val, a Percheron Draft Horse, is dressed to deck the halls and spread good cheer to all as the ultimate Christmas horse. Val is with cast member Jill Borges.

Last up in this frightfully fun costume cavalcade is Gracie, a Percheron Draft Horse, and cast member Hanna Richter. Could there be a sweeter ending than a Bumble Bee with its flower?

A big thank you to the staff of Circle D who care for the beloved horses of Disneyland Resort. Happy Halloween!