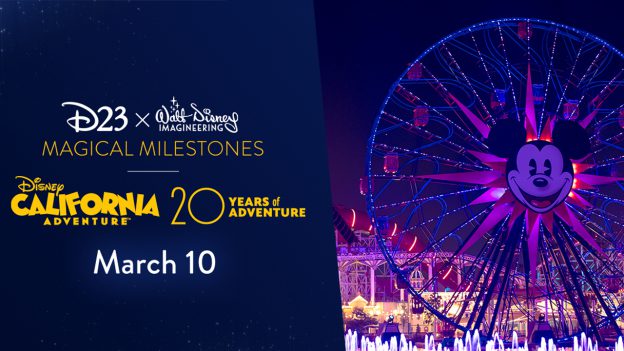 Adventure is out there—Disney California Adventure, that is! And D23: The Official Disney Fan Club is joining forces with the creative talents at Walt Disney Imagineering for a special member event: D23 x Walt Disney Imagineering Magical Milestones – Disney California Adventure Park 20th Anniversary. This is the first in a series of milestones that D23 and WDI will be partnering to celebrate, and each event will feature a grand gathering of Imagineers who will take guests on a journey spanning everything from park origins and history, to beautiful artwork and storytelling, to plenty of behind-the-scenes stories that introduce some of the fascinating people that bring our favorite places to life.

The Imagineering Story creator, Leslie Iwerks, hosts this special event, which starts with Walt Disney Imagineering president Bob Weis revisiting the park’s origins as Disneyland’s humble parking lot through opening day and its earliest additions. Over the next 90 minutes, guests will enjoy hearing about two decades of growth an expansion from Cars Land, World of Color, and Buena Vista Street to Pixar Pier, Guardians of the Galaxy – Mission: BREAKOUT!, and the upcoming Avengers Campus—including a peek behind the curtain at the highly anticipated land, and inside the exciting new attraction WEB SLINGERS: A Spider-Man Adventure.

Joining Iweks and Weis are a cornucopia of creatives from Walt Disney Imagineering past and present including: