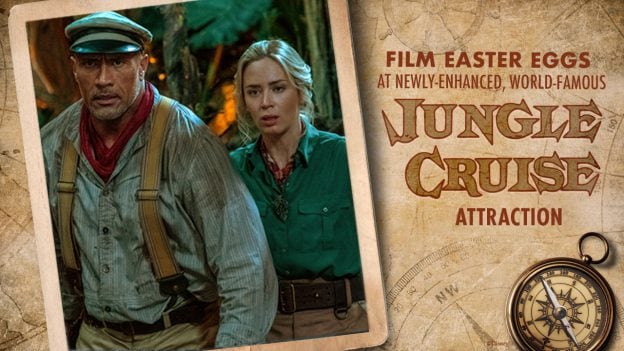 As they do with any Disney attraction, Imagineers added many layers of storytelling to the newly enhanced Jungle Cruise.

On a recent morning, we set out to the Jungle Cruise at Disneyland park on an expedition to find some of the “Easter eggs” Imagineers added throughout the attraction. We don’t want to give them all away, but here’s a look at just a few that are nods to the new “Jungle Cruise” film, premiering Friday.

A set of clothing worn by Skipper Frank Wolff (Dwayne Johnson) and intrepid researcher Dr. Lily Houghton (Emily Blunt), pictured in the image above, hangs on coat pegs behind Alberta Falls’ office door in the Jungle Cruise boathouse. Frank’s jacket also hangs on the wall in Alberta’s office, behind a wicker hutch.

A Conquistador’s helmet hangs in the Safari Supply Storage Room. In the film, one of the innumerable dangers and supernatural forces that Frank and Lily encounter is a group of Conquistadors, led by Aguirre (Edgar Ramirez).

On the opposite wall from Society of Explorers and Adventurers member Dr. Kon Chunosuke’s entomological collection is a map that Lily brought to Frank in the film, in which maps play a big role. This map guides Frank and Lily in their adventure of a lifetime down the Amazon. They are determined to uncover an ancient tree with unparalleled healing abilities – possessing the power to change the future of medicine.