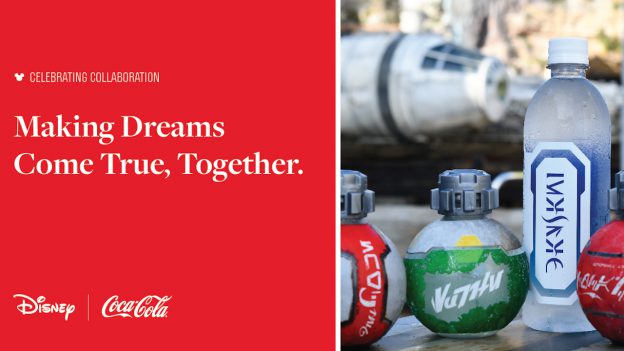 Celebrating Collaboration: A Refreshing Look at Disney’s History with Coca-Cola

Disney history buffs like myself may be interested in learning that our relationship with Coca-Cola started in 1942 when Walt Disney first appeared on the Coca-Cola radio program “The Pause That Refreshes on the Air.” In fact, back in 1950, Disney’s television special, “One Hour in Wonderland,” was sponsored by The Coca-Cola Company! And when Disneyland opened on July 17, 1955, our friends at Coke were right there alongside us, sponsoring Refreshment Corner on Main Street U.S.A. A few years later, on October 1, 1971, Magic Kingdom Park opened at Walt Disney World Resort and The Coca-Cola Company began its sponsorship of Refreshment Corner (now called Casey’s Corner) on Main Street U.S.A. Over the last 66 years, this relationship has grown at Disney Parks around the world—with everything from hosted locations to groundbreaking products that elevate the guest experience.

Whether you are enjoying a cool beverage at Café Hyperion at Disneyland Paris, ordering from the guest-favorite vending machine in Hong Kong Disneyland Resort, or listening to the out-of-this-world musical stylings of Cosmic Ray in Cosmic Ray’s Starlight Café at Magic Kingdom Park, Disney Park guests around the world have the chance to enjoy a wide variety of Coca-Cola products!

If you’re eager to try some of Coca-Cola’s global flavors, be sure to keep an eye out for the re-opening of Club Cool at EPCOT – coming soon! The newly reimagined space will include seven global flavors of Coca-Cola for guests to try—including the fan-favorite Beverly! Check out this sneak peek that Imagineer Zach Riddley shared of the space.

Like the Coke Orbs in Star Wars: Galaxy’s Edge or Pingo Doce and Pym Test Kitchen in Avenger’s Campus at Disney California Adventure park, Club Cool joins an impressive list of immersive ways that Walt Disney Imagineering and our Food & Beverage and Merchandise teams have worked with Coca-Cola to create engaging guest experiences. As for how we’ll innovate next—well, you’ll just have to keep reading the Disney Parks Blog to find out!