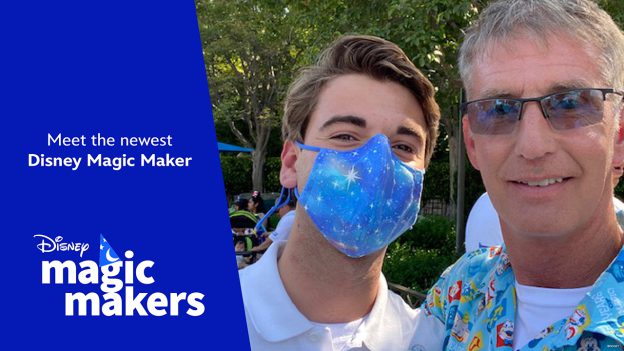 As we culminate our nationwide search for 50 Disney Magic Makers making an impact in their communities, we also recognize our cast members—the original Magic Makers— who make a difference every day.

Watching your dreams come true is even more magical when you’re able to share that special moment with the ones who’ve helped you along the way.

Joe Johnson always dreamed of working for The Walt Disney Company and saw his dream come true when he became a cast member at the Disneyland Resort this summer. Joe majored in screenwriting and has always admired Disney’s ability to tell stories. And now, he gets to do just that as a cast member at the Storybook Land Canal Boats at Disneyland park.

Joe’s family had hoped and intended to celebrate Joe in person on his first day as a cast member, but flying from their hometown of Conyers, Georgia seemed like less of a possibility as his first day neared.

Unbeknownst to Joe, his new fellow cast members, including trainers, Dave Turner and Mike Beckman, worked with his father to orchestrate a surprise greeting on his first day. “First of all, I thought that he was father of the year,” Mike said. “He said his son had wanted to be a cast member since he was 5 years old and he wanted to be here to share in that moment.”

Together, with a few other Fantasyland cast members, Mike and Dave were able to schedule a surprise meeting during Joe’s training to help a very special guest: his father. “Dave asked me to help the guest behind me,” Joe recalled the moments prior to seeing his father. “I think that was the first time ever in my life that I really didn’t know what to say! I genuinely had zero idea that was happening; it was definitely a real surprise.”

And for Dave and team, making magic for fellow cast is what makes being a cast member so special. “[These moments] give our cast a feeling of teamwork and family,” Dave shared. “[It shows] that everybody cares about them here; that we want them to be happy here.”

After making a magical moment for Joe, Mike took the extra step to recognize his fellow cast member Dave as a Disney Magic Maker, via Recognize Now, an online tool where cast members can thank fellow cast for their hard work and impact.

“Walt Disney called us the ambassadors of happiness, and that also translates into making magic and creating happiness for one another,” Mike shared. “It’s important that we lift each other up and that we remain one cohesive team and continue to keep Walt’s legacy alive.”

Continue checking the Disney Parks Blog for more inspiring stories of our cast and community – the makers of real, everyday magic.