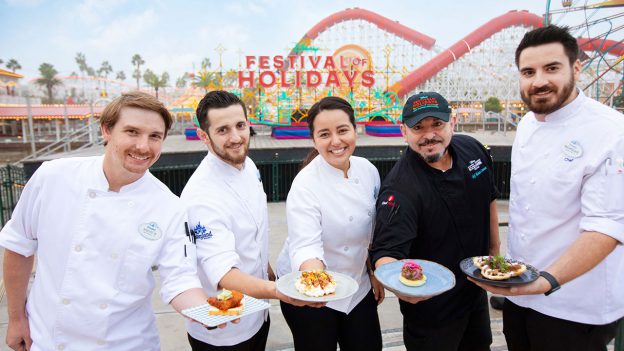 Disney Festival of Holidays returns to Disney California Adventure park today, and with it, the tastes of cherished celebrations from around the world — along with some personal inspiration from the Disney chefs who created the menus.

“Cooking brings people together,” said Chef Luis Madrigal, whose memories of cooking family favorites carne asada, carnitas and birria at home influenced his Esquites Carnitas Mac & Cheese dish being served at the Festival Foods Marketplace. “I think, how can I do that in the kitchen where I work now? How do I bring that to Disneyland?”

During the Festival, which runs through Jan. 9, 2022, guests can enjoy music, dancing, entertainment and, yes, the tastes of the joyous celebrations of holidays like Christmas, Hanukkah, Diwali, Kwanzaa and Three Kings’ Day. The entire Festival Foods team, including Chef Luis, have worked tirelessly to bring the flavors of these holidays to the celebration, honoring classic recipes while trying out some tasty twists. This year, the celebration extends to festival-inspired treats at select restaurants, carts and kiosks throughout the park.

Many of the holiday tastes and spirited libations have been inspired by Disney chefs’ unique stories, whether from a dad’s experiments deep frying turkey on Thanksgiving or a desire to help warm the hearts of those who can’t be home for the holidays.

But chefs don’t just draw inspiration from memories of home and their cultures, upbringings and traditions; they find it working together in the kitchen.

“That’s what keeps me going every day — my brothers and sisters in the kitchen,” said Festival Cook Andrew Zibble. “I mean the cooking’s great, but it’s more the family part of the kitchen aspect that I love about it and keeps me going.”

The recent introduction of the Inclusion Key has also solidified the chefs’ passions for bringing their backgrounds and heritage to the kitchen.

“Honestly, when they announced the Inclusion Key, I was like, you know what? We already do this,” said Chef Nick Carter. “We’re putting a name to something that’s already a part of the culture of our kitchen. We have a very diverse group; there’s a hundred of us that work in there sometimes. When we’re collectively making food, we decide together; it’s not just one person.”