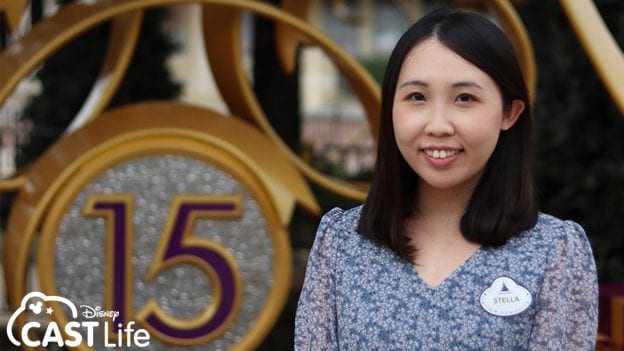 Meet Stella Wong! Stella is a Business Systems Analyst for the Technology & Digital organization at Hong Kong Disneyland Resort. Before finding a full-time role in Technology, Stella explored many different roles from Merchandise Hostess to Disney Intern (twice!) to Technologist.

Stella describes herself as a lifelong Disney fan and always knew she wanted to work for Disney one day. She accepted her first role with Disney as a merchandise hostess at Pooh Corner while she was still in school and earning a degree in Computing.

“I had wanted to work at Hong Kong Disneyland since my first visit because I love how Disney brings happiness and magic to others. I felt like I was living my dream of being part of the Disney family and working for such a world-class company,” Stella said.

As she progressed in her studies, Stella began looking for internships in her field. Her love for Disney and passion for technology came together when she was accepted to an internship with the technology team at Hong Kong Disneyland Resort!

During her internship in the Technology & Digital organization, Stella worked with the ticketing application team and had the opportunity to help enhance Hong Kong Disneyland Resort’s backend ticketing system, improving the user interface for cast members. Stella helped develop the HTML overlay that updated the layout and features of the system, helping cast manage and maintain ticket information.

“My internship was a great experience, and I got to work on UI development, which I love doing. I appreciate that my leaders believed in me and trusted that I was talented enough to work on such a big project,” said Stella.

As Stella’s technology internship concluded, she continued to look for opportunities to diversify her experience and accepted a summer internship with the Public Affairs department. Stella learned a lot about media events, but technology was always on her mind and she would regularly think of ways technology could help her department.

Stella finished her degree and was thrilled to be offered a full-time technology role where she could excel as a woman in STEM. She’s worked in the Technology & Digital organization ever since!

Now as a member of the Technology team for seven years, Stella has gained experience working for a variety of applications that support a wide range of businesses including Food & Beverage, Facility Services, and Security. In her current role supporting Hotel Systems, she provides support for backend systems and technology initiatives. For example, when Disney+ launched in Hong Kong, Stella and her team were tasked with equipping in-room TVs with the proper technology so guests could enjoy Disney+ in their hotel rooms.

“I feel so fortunate to have had the chance to rotate across different teams within the technology organization. As a woman in a STEM field, I’m thankful for the diverse opportunities I’ve had to develop both technical and interpersonal skills that will help me further my career,” Stella said.

A career highlight for Stella was being selected as a member of the “Technovators” (technology + innovators) team that was tasked with researching technologies that would help enhance the guest experience or create efficiencies at Hong Kong Disneyland Resort. Stella and her teammates attended several technology showcases across Hong Kong and presented their recommendations to Disney leaders.

“The team made a successful case for some of the robotics process automation technologies at the showcase, and the automation ended up reducing what was originally a time-consuming process by 10 times! It was rewarding to have a voice in what technology the company adopts, and to help improve the company’s processes,” said Stella.

Outside of her work on the technology team at Hong Kong Disneyland Resort, Stella is an active Disney VoluntEAR and is a member of the Disney VoluntEARS Leadership Council. “Being a member of the VoluntEARS Leadership Council has helped me meet other cast members outside of the technology department and be hands-on with helping local charities. I’ve developed my leadership skills and I’m able to give back to my community in ways I really care about,” Stella said.

Stella’s Disney career is varied and diverse, and she’s happy to have found a home on the Technology & Digital team where she can create Disney magic for guests – and enjoy the Disney magic herself.