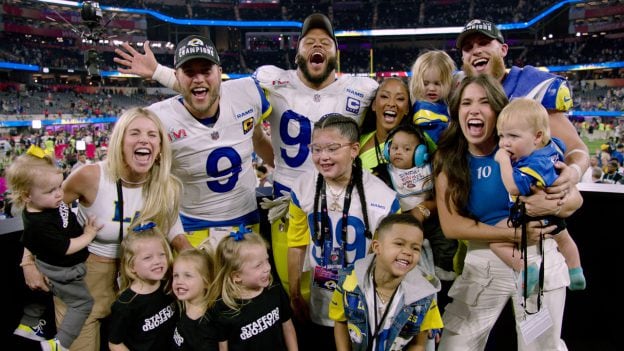 The Super Bowl just ended here at SoFi Stadium in Inglewood, Ca., and if you’ve been following Disney’s involvement in the big game over the years then you know that I have some exciting news to share with you:

MVP Cooper Kupp had arguably the game of his life Sunday night in helping the Los Angeles Rams defeat the Cincinnati Bengals 23-20 to win Super Bowl LVI. And immediately afterwards, amid the euphoria and jubilation engulfing the stadium, Kupp, Donald and Stafford turned to the TV cameras and, with the help of their families, shouted those words that NFL players dream of saying after winning the Super Bowl: “We’re all going to Disneyland!’’

Their post-game proclamation is the centerpiece of the latest edition of Disney’s famous Super Bowl commercial that has been an integral part of Super Bowl week for decades. This is the first time three Super Bowl players have appeared in the commercial. You can catch the TV spot airing nationwide this week on major TV networks and social media sites.

This year’s “what’s next” commercial also features several Make-A-Wish® kids who made a wish to attend the game and cheer on the Rams, including Kupp, Donald and Stafford. Since 1980, Disney and Make-A-Wish have granted more than 145,000 life-changing wishes globally for kids with critical illnesses.

To bring the Rams to victory, Kupp scored on a one-yard touchdown pass from Stafford with 1:25 left in the game to cap a dramatic scoring drive, finishing with eight catches for 92 yards and two touchdowns. Donald had four tackles and two sacks, including a sack of Bengals quarterback Joe Burrow on fourth-and-one in the last minute that sealed the victory. Stafford threw for three touchdowns and completed 26 of 40 passes for 283 yards.

The Rams had the kind of magical performance that fittingly deserves a celebration at a magical place like the Disneyland Resort!

And if you happen to be at the Disneyland Resort tomorrow, Monday, Feb. 14*, you may catch a glimpse of Kupp, Donald and Stafford as they celebrate their team’s Super Bowl LVI victory with a fun-filled day experiencing some of the park’s signature attractions. There will be a celebratory cavalcade down Main Street, U.S.A., in Disneyland park featuring these players at 1:30 p.m. PT.

But don’t worry if you won’t be at the park tomorrow, because there are a few ways you can still partake in the fun from wherever you are! Follow along LIVE on @DisneyParks TikTok and @DisneyParks Instagram at 1:30 p.m. PT, for a livestream of the cavalcade! Additionally, you can get a look back at their day at Disneyland Resort Monday afternoon, right here on the Disney Parks Blog.

* To enter a theme park, both a valid admission and theme park reservation for the same park and same date are required. Park reservations are limited, subject to availability, and are not guaranteed for any specific dates or park. Visit Disneyland.com for details.