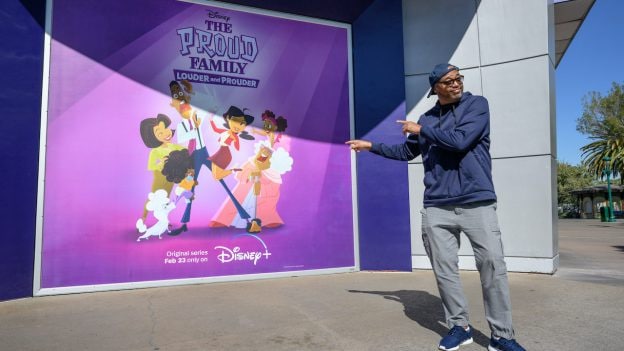 Bruce W. Smith, Creator and Executive Producer of the original “The Proud Family” series recently stopped by the Disneyland Resort to Celebrate Soulfully. During his visit, he shared about his experience at The Walt Disney Company, his years as an animator, and shared exclusive details about his new series “The Proud Family: Louder and Prouder,” which he serves as creator and executive producer, now streaming only on Disney+.

Q: Bruce, you’ve had quite an amazing career! You got your start with Walt Disney Studios as an animator on “Who Framed Roger Rabbit.” What’s it like to animate characters that you helped bring to life on the big screen, and then see them come to life at Disney Parks with attractions like Roger Rabbit’s Car Toon Spin?

I remember my first day working on the Roger Rabbit film and seeing the early story reels. I remember just the looney-ness of the stuff that was on screen. One of the things we’re told to do as animators is to put as much as of who you are into your performances and everything, right? If you go back and look at that movie and look where Hoskins is driving into Mickey’s Toontown for the first time and then the sun comes up and it’s singing, I did all that animation. Then you look at the side and you see all the birds and the trees and stuff. And then you’ll see a tree that’s strumming a banjo that has this big old tree Afro and has tree lips. Well, that was a caricature of me that I drew.

Q: What was your favorite Disneyland attraction growing up?

For us, it’s celebrating Black History Month all year long, every day. Even in making “The Proud Family: Louder and Prouder,” we do this fun thing where we celebrate every aspect of who we are as a people, and have everyone join in.

Q: When “The Proud Family” was released on Disney Channel in 2001, it quickly became an iconic cultural phenomenon as Disney’s first Black animated series. What was it like to bring this first-of-its-kind show to life, and what was the inspiration behind its creation?

Well, for me, it was just something I think that was just inherent in me. I think I thrive when I can work on characters that I can identify with and it’s a space that, ever since being a kid, I used to try to carve for myself. I used to love drawing my translation of characters that I would see in the live-action world. I applaud the Studio for really investing in the idea of being diverse and inclusive. And Disney has always prided themselves on that.

The inspiration really was the landscape at the time. When I first started just the general concept of “The Proud Family,” the animated sitcom started to really sort of jump into the environment as something that we hadn’t seen before. But to be honest I thought, “okay, well, where are the Black people at?” We should be able to play in this space, too. So that’s what sort of was the springboard of the idea for me. And then I just kind of looked at my own family and thought, “okay, Oscar: he’s kind of me: stupid and goofy.” Trudy was modeled after my wife at the time. She’s more of the rock of the family really. That allows him (Oscar) to be as goofy as possible, and Suga Mama was the bane in Oscar’s side you know. That was my mom. My mom grew up in Texas, and her nickname was Sugar. So as grandkids started popping up all over the place, she didn’t want to be called grandma. That’s where the term Suga Mama came from, so I just borrowed that term, put it on this character and just kind of formed a relationship that my mom and I kind of had. I took all those parts together and pitched them.

And certainly, while being Disney’s first Black animated series, I don’t want to be the only one. I mean, this is sort of the invitation of everybody saying “bring your ideas to the table.” And Disney is a place to really kind of look at all these ideas and explore different genres with all sorts of people. So that’s what makes it fun.

Q: How does it feel now to continue the story and bring “The Proud Family” to a whole new generation?

It just made sense to revisit something that actually worked back in the day and when executive producer Ralph Farquhar and I got that opportunity, we knew what we were going to do with it: age characters up a couple years, keep the world, keep all of our original cast and just put everything in that’s happening today. Now we have all the elements of what teens go through now: social media and being much more politically aware, and racial areas that teens never really had to deal with before. The show looks like what the world looks like when you walk outside of your normal walls and that’s what makes it fun. We just brought on a whole lot of real characters and lots of really fun guest stars, great music. These are the elements that really made our show very memorable to our audience, and we’re bringing more of the same but a lot of new stuff.

Q: What can we expect from Penny and the rest of the Proud family in this new series?

Penny is still coming of age; there’s a lot of things that she’s learning, and Oscar is still not letting go. One of the new things we’ll discover is that Penny has a boyfriend, and we’ll see how this tracks with Oscar. But you know, I think one of the great things about this show is that you learn from Penny, right? She learns a lot along the way, but she also teaches her dad to understand who she is and let her be who she needs to be in order for her to grow. Hopefully people watching the show will come away with an understanding of how to help navigate this arena along with adults, because adults have to understand their kids and give them room to make mistakes.

Q: What do you hope audiences take away from “The Proud Family: Louder and Prouder?”

What’s great about the show is we built it for family viewing, so that’s how we thought about that whole gap of time. There’s something for everybody in this. We really infuse content, music, and humor in a way that everyone’s laughing at things at different times. The dialogue and humor are genuine. It comes from a real place. I think our culture is kind of a mash up anyway, and the show is basically a response to our culture. And I think that’s what makes everything cool and hip, and we watch stuff all the time and we embrace other people’s culture that way, right? That specificity is what keeps it genuine.

“The Proud Family: Louder and Prouder” is now streaming on Disney+, and enjoy Celebrate Soulfully at Disneyland Resort with experiences in February and beyond.