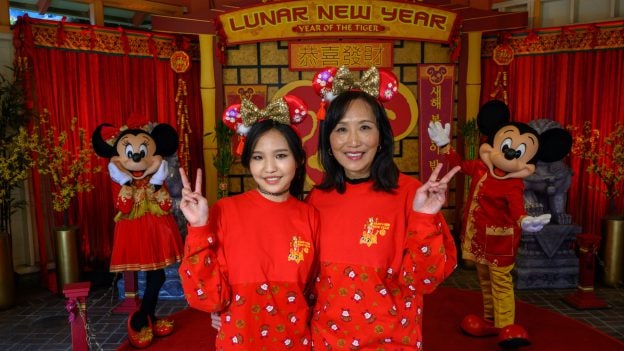 Rosalie Chiang, who voices Meilin Lee in Disney and Pixar’s all-new original film “Turning Red,” recently dropped by the Disneyland Resort to celebrate Lunar New Year at Disney California Adventure park and the film’s upcoming release on Disney+. And it turns out that she has a lot in common with the character to whom she lends her voice!

“Turning Red” is the coming-of-age story about a Chinese-Canadian teenager, Meilin Lee, whose world is turned upside down when she suddenly begins turning into a giant red panda whenever her emotions are heightened.

While Rosalie may not have the uncontrollable ability to transform into a giant red panda when she gets excited (though she would fit right in at the Disneyland Resort if she did!), she shares many similarities with Meilin. She’s individualistic, confident and has many talents (she’s a gifted pianist, dancer, and is fluent in Mandarin!).

“Turning Red” also delves into the beauties and complexities of mother-daughter relationships, based loosely on director and co-writer Domee Shi’s personal story and relationship with her own mother. How fitting that Rosalie brought her mom, Rachael, with her on her visit (with whom she has a close relationship!). Like Meilin in the film, Rosalie and her mom share time-honored traditions from their Asian culture, including Lunar New Year.

During her visit, Rosalie and her mom experienced the gorgeous cultural displays, food and beverage offerings, live performances, and unique merchandise on full display in celebration of Disney California Adventure park’s tribute to Chinese, Vietnamese and Korean cultures through Feb. 13.

Rosalie is proud to be the first Asian-lead in a Disney and Pixar film, and she cannot wait for people to see “Turning Red” streaming March 11, 2022, only on Disney+. Enjoy a special look at her time celebrating Lunar New Year at Disney California Adventure park!