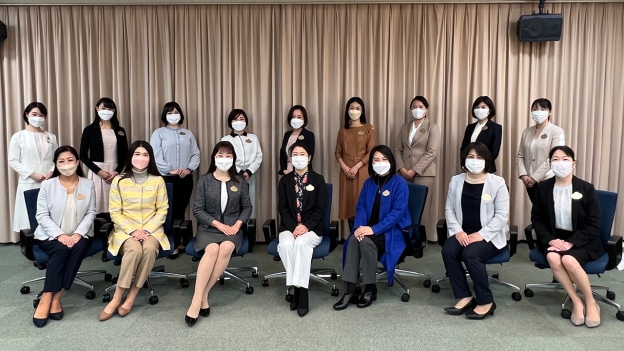 In 2000, with the opening of Japan’s first Disney-branded hotel, a major expansion took place that transformed our property from a single theme park to a major resort. The “Tokyo Disney Resort Ambassador” was born from that pivotal transformation and the activities of the Ambassador role have also continued to broaden and grow to new horizons.

The change in Ambassador title gives a sense of how deeply rooted in history this Ambassador program is. I recently had the valuable opportunity to meet with past Tokyo Disney Ambassadors. To honor the fulfillment of their respective terms, and to strengthen our connection as members of our global Ambassador family, a very special golden name tag was presented to each of the attendees. The event served as a reunion with everyone happy to see one another. In all, from beginning to end, it was a very pleasant event filled with camaraderie, good company and shared stories.

After the reunion, some of the former Ambassadors reached out to me to let me know that wearing the special name tag created more opportunities for the cast to proactively seek interaction with me which, in turn, will widen my network, and the golden nametag is a source of strength as it serves as a reminder to always believe in magic and the happiness that it brings. Inspired by how they leverage their experiences as Ambassador and continue to deliver magic in new and innovative ways to Tokyo Disney Resort, I vow to do my absolute best to proudly carry on the name of Ambassador and cannot wait to put on that special name tag in two years.