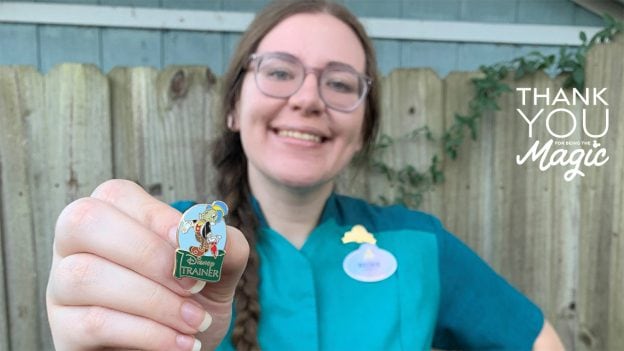 Recognizing and Celebrating the Trainers of Walt Disney World

I think we can all agree that at Walt Disney World Resort, the cast are the heart of the magic. But before “earning their ears,” the first step for any cast member is Disney’s best-in-class training led by our Disney Trainers, who empower them to spread pixie dust, provide exceptional guest service and make everyone feel welcome.

Disney Trainers not only act as a resource for on-the-job training, but as one of the first confidants a new cast member has when embarking on their adventure to become a magic maker. They introduce Disney’s world-renowned safety and courtesy standards, while also bringing to life Disney’s rich heritage. Even today, many of our longest-tenured cast members still remember their trainer fondly, recognizing them as having a positive impact on their careers.

Across Walt Disney World, there are over 8,000 Disney Trainers who provide supportive, engaging training experiences for both new and seasoned cast members. They can be identified with a Jiminy Cricket Disney Trainer pin, recognizing them as part of an important legacy of tradition and excellence set forth by Walt Disney, himself.

And in just the past five months alone, these dedicated trainers have trained over 8,000 new or returning cast members!

As part of Global Recognition Week, we’d like to take this moment to celebrate, recognize and share gratitude with these cast members, who approach each training experience with patience, kindness, and confidence; who inspire happiness within their teams; and who demonstrate exceptional guest service, bringing the magic to life for both our guests and cast every day. No matter a cast member’s role, Disney Trainers make all the difference for starting a career at the heart of the magic.

I had the chance to interview some of these passionate cast members and learn more about who they are and their experiences as a Disney Trainer.

Why did you want to become a Disney Trainer?

Christine: “I love the feeling of someone succeeding because of the quality and care given to them while learning something new. I want people to believe in themselves and know that they can do anything!”

Christine is a Lifeguard trainer from Blue Bell, Pa. She’s been with Disney for a total of 11 years and has trained around 50 cast members.

Who inspired you to become a Disney Trainer?

Beckie: “One of my leaders really believed in me when I first started at Disney. Right away she was constantly pushing me to take on more responsibility, whether that was becoming a trainer or a coordinator. She was always great about sharing all the knowledge she had about our operation and encouraged me to do the same. I hope I inspire my trainees the way she inspired me.”

Beckie is a Costuming trainer from Ringtown, Pa. She’s been with Disney for 4 years and has trained over 50 cast members.

What does being a Disney Trainer mean to you?

Ruben: “Being a Disney Trainer means that the terms ‘teamwork’, ‘diversity’ and ‘inclusion’ become part of your real, everyday life. With the introduction of The Fifth Key of Inclusion, I’ve been able to teach and watch others grow, but also grow as a better person myself.”

Ruben is a Culinary trainer from Caracas, Venezuela. He’s been with Disney for 14 years and has trained over 100 cast members.

What Disney Trainer advice do you have for new cast members?

Moe: “I tell cast how important it is for them to be welcoming to guests and fellow cast members. Just a simple smile and a warm hello can make all the difference.”

Moe is a Guest Relations trainer from North Andover, Mass. She’s been with Disney for 4 years and has trained over 100 cast members.

What makes you a great Disney Trainer?

What do you hope for when training the next generation of Disney cast members?

Moe:“I want the next generation of cast members to love and appreciate their role and know how vital they are in the guest experience.”

What will be your legacy as a Disney Trainer?

Christine: “I want them to remember the way that I believed in them and the way that I could lift them up to be a guide for them. I want to be known for being good-hearted, empathetic and a kind person. This has and always will be my legacy as a Disney Trainer.”