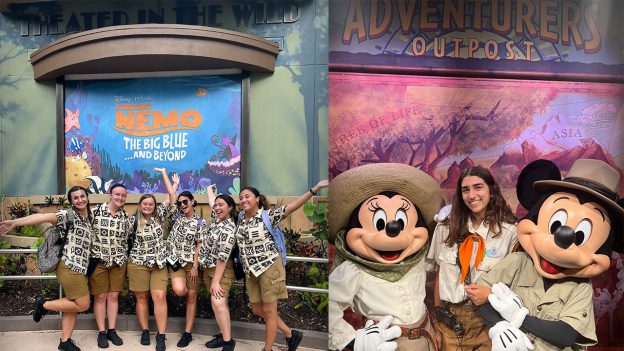 Disney Cast First Reactions to Previews for ‘Finding Nemo: The Big Blue… and Beyond!’ and Adventurers Outpost

“Finding Nemo: The Big Blue… and Beyond!” is o-fish-ially open in Theater in the Wild at Disney’s Animal Kingdom, and Disney Cast Life previews went swimmingly! While singing along to familiar tunes like “In the Big Blue World” and “Go with the Flow,” cast members at Disney’s Animal Kingdom were happy as clams to be the first to see the show along with its new scenic pieces, LED screens, script and more.

One of the best things about Disney Cast Life is the opportunity to come together as fellow cast members for preview opportunities like this. “Finding Nemo: The Big Blue… and Beyond!” does a fin-tastic job of shell-ebrating what it means to come together—it’s literally in the lyrics! Cast were practically singing, “Together! We swim together!” as they exited Theater in the Wild. Dive in to cast member reactions during Disney Cast Life previews of “Finding Nemo: The Big Blue… and Beyond!”

Cast found more than just Nemo as preview adventures continued on land at Adventurers Outpost, where Mickey and Minnie will soon be posing for postcard-perfect photos later this month.

It’s an exciting time at Disney’s Animal Kingdom with both these returning entertainment offerings. Cast are the heart of the magic, which makes cast previews the perfect way to welcome “Finding Nemo: The Big Blue…and Beyond!” and character greetings at Adventurers Outpost back to the park!

Likes (4)
0 Comments
Share Disney Cast First Reactions to Previews for ‘Finding Nemo: The Big Blue… and Beyond!’ and Adventurers Outpost