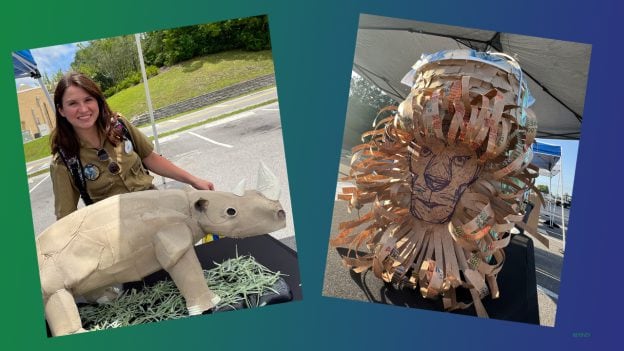 There is no place quite like Disney’s Animal Kingdom Theme Park during Earth Month. All month long, Disney’s Animal Kingdom cast have been picturing what’s possible for our planet and embracing Disney Planet Possible, which strives to help our planet through sustainability, conservation and storytelling initiatives. On Earth Day, the park’s anniversary, cast demonstrated that the sky is truly the limit when it comes to what you can dream, create or envision for a healthier and happier planet.

Cast showed their passion for the planet…

Cast decorated compost buckets to use at home. Composting is nature’s way of recycling. It’s a natural process where organic matter decomposes and is recycled into a nutrient-rich soil product, often used for gardening, farming, landscaping and more.

In 2021, Walt Disney World Resort composted 15 million pounds of food waste. Disney’s Animal Kingdom is expanding its efforts of composting, so next time you are at Restaurantosaurus, make sure to place any food waste in the appropriate bin.

You can do a lot with recycled material! Cast were challenged to create art pieces made of entirely recycled material such as cardboard, plastic bottles, foil, paper scraps and other items that would normally be sent to a landfill or recycling bin. This rhino sculpture was inspired by the park’s white rhino conservation efforts and created by a cast member at Kilimanjaro Safaris! Check out another Disney Cast Life story connected to rhino conservation.

With sustainability activities and games!

It’s actually pretty fun to learn how to help the planet! Cast learned more ways to recycle with a guessing game of which items can be recycled and how. Cast learned how plastic bottles can be converted into textiles. Some of these textiles are even used in costumes at upcoming attractions as shared previously on the Disney Parks Blog.

Partnering with the Disney Conservation Team Wildlife, other cast members  learned the ‘ins and outs’ of purple martin nests, which are dotted along backstage areas of Disney’s Animal Kingdom. Cast experienced their own Earth Day magic with a few purple martin chicks even hatching during this cast event. Look at how cute these new baby birds are!

With donations to the Disney Conservation Fund!

Cast also learned more about the Disney Conservation Fund (DCF) and took action to protect wildlife through their experience. Next time you’re at a merchandise location at Disney’s Animal Kingdom, feel free to ask a cast member about contributing to the Disney Conservation Fund. Guest contributions to the DCF have been a part of the more than 1,000 species protected through this program to date.

It may only be Earth Day once a year, but for Disney’s Animal Kingdom and our Parks and Resorts around the world, the earth-friendly efforts never stop. Each and every single cast member is part of the possibility we are working to put into practice. Earth Day 2023 will mark the 25th anniversary of Disney’s Animal Kingdom and we can’t wait to see what our cast members dream up to continue our commitment to a world where people, plants and animals thrive!