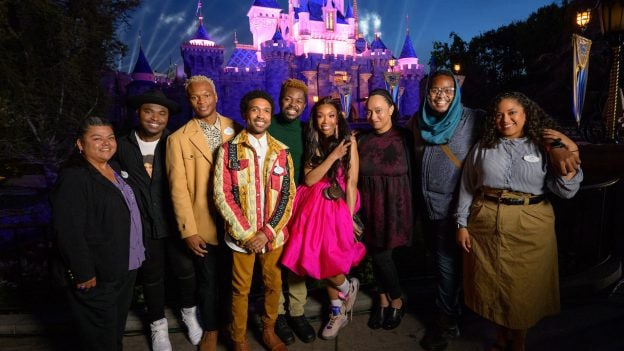 Growing up, the Disney Princess characters were my best friends. I knew every lyric serenaded by Belle, Ariel, and Jasmine. While every animated Disney Princess held a special place in my childhood, it was The Wonderful World of Disney’s release of Rodgers and Hammerstein’s “Cinderella” starring Brandy Norwood that still holds a special place in my heart! This was the first time I saw a Disney princess who looked like me – brown skin, braids and all!

This same feeling of nostalgia and cultural representation was echoed by our Disneyland Resort PULSE Cast Members, one of the Business Employee Resource Groups (BERGs) at the Disneyland Resort that advocates for nurturing the cultural, educational and professional development and well-being for cast members of African and Caribbean descent and background, when they had an exclusive opportunity to meet the global superstar and Grammy Award-winning recording artist after a live performance in front of Sleeping Beauty Castle of “Starting Now” – the Ultimate Princess Celebration anthem.

Jasmine: I grew up watching Brandy in “Cinderella.” I wanted to be her; I idolized her! But, meeting her is a dream come true. I don’t believe this is real right now – Brandy is probably the only person I would wake up this early to see.

It was inspiring to see someone in a starring princess role that originated as a predominantly white role on Broadway and in the original Disney film. To see someone who had braids and had my skin tone was beautiful! And to see the prince falling in love with her meant so much to me. Seeing Brandy as Cinderella made me proud of who I was and proud of my skin tone, and proud of my heritage. It makes me so happy for young girls to see such representation at a young age. Now, young girls get to see the vast diversity of the Disney princesses we have today.

It makes me excited for the future of storytelling because so many stories haven’t been told yet. There’s so much diversity and many races, cultures, and ethnicities with so many amazing stories to be told. To have every single child grow up and see themselves represented is special.

Brandon: Brandy is one of the reasons why I do what I do. I’m one of the diversity and inclusion leaders here at the Disneyland Resort with Character Operations. Brandy is one reason I felt comfortable doing what I do because she was the first princess that looked like me on screen! Seeing her and Whitney Houston in the live-action “Cinderella” normalized being me and feeling okay to be myself. It pushed me to fight for others and to show that representation does matter because it can change the path of someone’s life. Seeing someone with similar backgrounds and experiences provides you with a safe space and confidence.

I just want to say thank you so much, Brandy, for being you and doing all that you’ve done. You’ve been a great inspiration and a good representation for me. Growing up, there wasn’t as much representation. Of course, we have a lot more of it now, but Brandy will always be an iconic star for being a trailblazer.

Jessica: It’s so incredible to meet the first Black Cinderella! She’s the first princess I remember watching on TV. It sparked this creativity in me. I think it’s the whole reason why I even work here. I began my career in theater, bringing me to where I am today at the Disneyland Resort. So, seeing Brandy is amazing because she is so much a part of my life! To see her in person, I want to thank her for everything she’s done for me, even though she doesn’t even realize it. It’s essential for people to feel represented and know that there are people like them. Period. There are so many cast experiences that happen here at Disney, and I try to say yes to them, and sometimes it brings me to great things like meeting Brandy!

Clinton: I also grew up listening to Brandy. I grew up mimicking Brandy’s voice. So, to even have a chance to watch her right now and be so close is something I never thought would ever happen. I’m honored. I still have a double platinum VHS of when she was Cinderella. I grew up watching “Moesha,” and I have all her albums. I call her the ‘vocal bible’ because her voice does everything! No one sings like her.

Being here this morning, feeling her energy, and remembering what she’s done for the black community in the arts is amazing! Brandy’s role as Cinderella was inspirational for not just the Black community but for the world! Black, white, Asian, it doesn’t matter. Everyone’s stories matter and are valid and important.

Check back all week for more World Princess Week exclusives on the Disney Parks Blog!