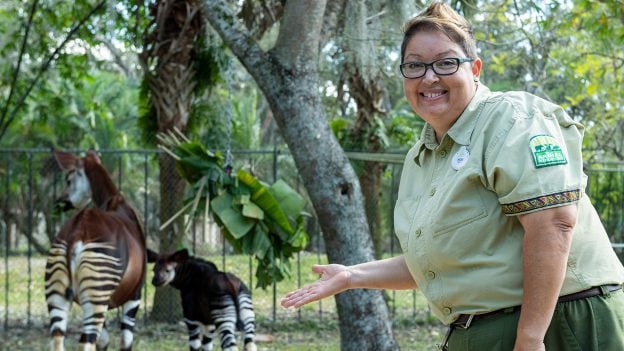 Disney animal keeper Mori was 13 when she found her calling in life. Thumbing through an encyclopedia of mammals in her local library, she stumbled on an animal she’d never heard of before.

In fact, most Walt Disney World Resort guests have never heard of it either. “What is that, a zebra horse?” guests often ask her. “That’s crazy looking,” others add.

Given the reclusive nature of the okapi and the remote rainforests it hails from, it’s not surprising it’s so mysterious.

Okapis are born for stealth. Immediately after birth, natural instincts kick in and they “tuck” away in the undergrowth of the forest to avoid predators. Their unique coats – including their striped legs that often get them confused with zebras, though they’re actually the only living relative of giraffes – help them blend into their surroundings. Okapis in the forest find each other through scent glands in their feet. To avoid their scent being found by other okapis, calves don’t defecate for the first month after birth. Everything about these impressive animals prepares them for being amazing at avoiding detection – by predators and people.

In fact, okapis long were believed to be nothing more than a myth … the Democratic Republic of the Congo’s version of Bigfoot or the Loch Ness Monster. It wasn’t until 1901 when they were actually seen for the first time by Western scientists.

This mystery spoke to Mori, and she knew she wanted to work with them. Three years after her encyclopedia discovery, at 16 years old, she saw her first okapi at the Bronx Zoo in New York. “It was the most beautiful animal I’d ever seen,” Mori beamed when asked about the experience. “I was in shock and awe that it was actually in front of me, and ever since then I’ve been obsessed.”

Now a 30-year cast member, Mori works with a variety of animals ranging from birds to African hoof stock including zebras, giraffes and waterbuck on Disney’s Animals, Science and Environment team. And while she has many highlights over her career, including opening Disney’s Animal Kingdom Theme Park in 1998, her favorite is working alongside the animal of her youth – the okapi.

Earning an okapi’s trust is no small feat. Like other animals at Disney, okapis are trained to participate in their own care, but this can prove to be challenging due to their naturally reclusive nature. “You start working with them, and all of a sudden there’s a bond,” Mori shares. “It’s just amazing to see that transition.”

Mori has cared for eight-year-old Olivia since birth, and now Olivia is a first-time mom with a calf of her own. Although Mori had the day off when Olivia gave birth, it was a moment she wouldn’t miss for the world. “I had the night team Zoom me so I could watch,” she remembers. “So, I literally watched Beni’s birth at 2 o’clock in the morning on my iPhone.”

Mori will even speak Spanish to the okapis. “We have the Inclusion Key at Disney,” she jokes. “I speak Spanish to all of them. I wouldn’t say they’re bilingual, but they know my voice and often associate it with food.” And while the okapis can’t quite use their black tongues to roll their Rs just yet, their tongue color is thought to prevent sunburns during their long browsing periods throughout the day and is used like a finger to pull leaves from branches.

Mori’s one word to describe okapis is “majestic.” And working with this majestic – and endangered – species is a childhood dream come true. However, it’s a dream she hopes will be around for future generations to enjoy, as well.

As we recognize World Okapi Day, Mori’s ask is simple. “Learn more about them and consider donating to projects like Okapi Conservation Project to help protect okapis and the forests around them.”