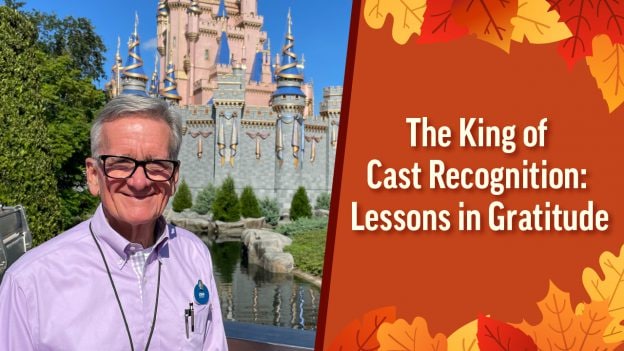 The King of Disney Cast Recognition: Lessons in Gratitude

The Thanksgiving season is a time of reflection and gratitude, and there is no better role model on how to express meaningful appreciation than John Lilly, Duty Manager at Magic Kingdom.

As everyone who meets him quickly figures out, John Lilly is a beacon of light in the way he makes cast members feel seen, recognized, and appreciated. Not just during the Thanksgiving season, but year-round!  You would think it’s impossible to combine the movie “Up!”, gratitude, and the beauty of my favorite flower all in one person—but John does it effortlessly.

Whether he’s walking down Main Street, U.S.A or through Adventureland, John makes a point to greet as many cast members as possible on his travels throughout the park. His personal philosophy? “A good old fashioned thank you, with context, goes far.”

It’s no wonder that throughout his 23-year career at Walt Disney World Resort, John’s dedication to caring for our cast members and recognizing the magic they make every day has earned him the nickname, the “King of Cast Recognition.”

Our cast members use a tool called RecognizeNow! to share the magic of appreciation with one another, and John makes fantastic use of it!

“I try to take the time to observe cast members in action so I can capture moments of outstanding guest service,” John explains. “I want to make sure they know when they’ve made a positive impact on our guests.”

We hear time and time again that the interactions you have with our cast are what makes Walt Disney World so special. The gratitude and appreciation you have shared through more than 500,000 mobile cast compliments helps fill our personal pixie dust meters and inspire us to keep making magic.

If you would like to express your thanks for a great interaction during this season of gratitude, you can access the mobile cast compliment feature on the My Disney Experience app by searching “Cast Compliment!”