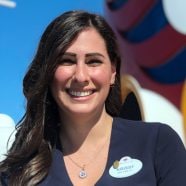 As a Public Relations Manager for Disney Cruise Line, and avid cruiser, I love getting to share the latest and greatest news with readers of the Disney Parks Blog. I was a Disney fan long before I became a Cast Member – starting in the early 1990’s when I walked down Main Street U.S.A. for the first time and discovered that magic was truly waiting for me around every corner. Since then, the creativity, imagination and storytelling of Disney has inspired me daily. My first role in the show was as a Character Attendant at Magic Kingdom Park where I was part of the opening team for Pete’s Silly Sideshow in New Fantasyland.