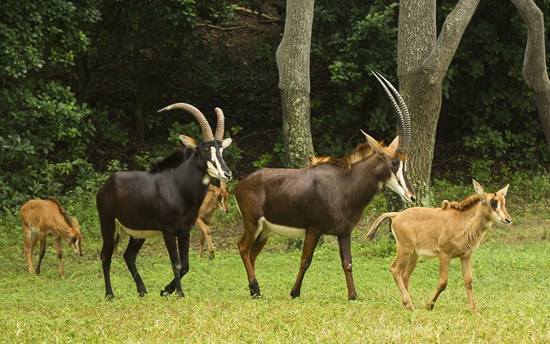 After spending about two months in their backstage habitat bonding with other members of their herd, three sable antelope calves, born this summer at Disney’s Animal Kingdom, have joined the herd on the Kilimanjaro Safaris savanna. The calves – two males and one female – were cared for in their backstage home because sable moms typically will “tuck” their calves in high grass to protect them from the predators they might encounter in the wild and return to them periodically for feeding. This behavior could prevent our animal care team from being able to monitor the calves properly. The calves are now old enough to be out of the “tucking” phase and are spending the day traveling with the rest of the sable antelope herd, as seen in this photo by Gene Duncan.

At birth, the calves weighed between 35 and 40 pounds. When they reach adulthood, the female will weigh nearly 400 pounds, and the males will be about 50 pounds heavier. In their native habitat in southern Africa, the sable’s natural predator is the lion and other carnivores. Like many African species, sable antelopes compete for living space with humans.

Disney’s Animal Kingdom guests can see the sables when they ride the Kilimanjaro Safaris. Another great way to see the sable antelope – and a host of other African wildlife – is by experiencing the Wild Africa Trek, a special adventure that includes a VIP safari and a visit to an exclusive safari camp with fantastic views of the wildlife on the savanna.