Walt Disney World Resort photographer Matt Stroshane captured one of my favorite images of the month early this week. That’s the SpaceX Falcon 9 rocket soaring to the International Space Station over Mission: SPACE at Epcot. The red streak in the sky is the flame from the rocket engines over a 64-second exposure as it arced into orbit. 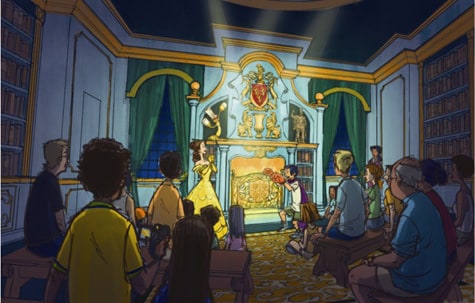 And as regular readers know, we have several ongoing stories that run each week on the Disney Parks Blog. Our newest series is called “All in the Details” and it features images of some of the special touches Walt Disney Imagineering has been adding to New Fantasyland attractions at Magic Kingdom Park. This week’s photo shows the first glimpse of Belle’s dream library that’s a part of the new Enchanted Tales with Belle attraction. Be sure to check the blog on Tuesdays for more.

All in the Details: A Peek Inside Belle’s Library in New Fantasyland at Magic Kingdom Park – Catch a first glimpse of Belle’s dream library that’s a part of the new Enchanted Tales with Belle attraction.

More of Cars Land at Night Through a Photographer’s Lens at Disney California Adventure Park – Paul Hiffmeyer shared some of the first photos of Cars Land as it will be seen once the sun sets.