Race on Over for the ‘Car Show at Disneyland’ Pin Collection

For those of you who are making the “Road Trip to California” next week for the pin release and signing, and for those of you who weren’t able to hitch a ride…here’s your first look at the next set of pins, set to release August 17. Themed to “A Car Show at Disneyland,” this collection of pins will range from characters like Tinker Bell, Oswald, Jessica Rabbit, Dumbo, Woody, Buzz, Sulley and the Yeti, to an array of pins idolizing hood ornaments, trophies and keys.

I asked Disney Design Group artists Ron Cohee and Mike Sullivan for their thoughts on this new collection and here’s what they had to say:

“As a big Pixar fan, I really enjoyed working on these pins,” says Ron. “The pins are based on the scenes shown at the drive-in theater during the end credits of the film ‘Cars,’ where snippets of classics tell a different tale like ‘Toy Car Story,’ ‘A Bug’s Life,’ and ‘Monster Trucks, Inc.’ In this automotive universe, the Buzz Lightyear car is a Space Ranger Lunar Rover, Flik is – as you know – a ‘Bug’ and the Yeti is, of course, an abominable snowplow.”

Mike went on to share that it was their extensive research of different styles of cars that led to the designs. “I wanted each car to tie back to its owner. For example, Mickey’s car is a double ‘M,’ while Minnie’s car is based off the shape of her shoes. But it was when I was doing the illustration for the car show pin set,” says Mike, “that I decided I wanted to crank things up a notch, so I incorporated the iconic cars from the classic Disney and Pixar films with theme park attractions. A few that we consider trophy-worthy are Cruella’s Roadster, the Mayor-mobile from ‘Tim Burton’s The Nightmare Before Christmas’ and the Incredimobile, among others.” 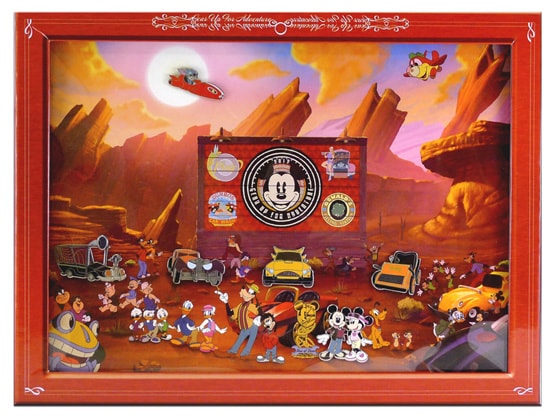 There are about 15 pins in all, and while I can’t show you all of them, we will have the entire collection posted on www.DisneyPins.com. For those of you joining us at Disneyland Trading Night on June 29 at Disney’s Paradise Pier Hotel, keep your eyes peeled for a look under the hood at more of these pins scheduled to release this summer.

Just like last time, these pins will be part of an online wristband opportunity. The entry period is July 25 – August 8, so don’t miss out. Those selected will have the opportunity to purchase the pins on the morning of August 17 at Disney’s Pin Traders. Tip: On August 17, Ron and Mike will be on hand for a special appearance and signing from 9-11 a.m. at Disney’s Pin Traders, and they will appear again later that evening from 7-10 p.m. as part of Trading Night at Disney’s Paradise Pier Hotel.

So get in gear and remember to sign up!

Check out these posts for more news about Disney pin trading:

Destinations: Race on Over for the ‘Car Show at Disneyland’ Pin Collection